“Make of yourself a light,”
said the Buddha,
before he died.
I think of this every morning
as the east begins
to tear off its many clouds
of darkness, to send up the first
signal -- a white fan
streaked with pink and violet,
even green.
An old man, he lay down
between two sala trees,
and he might have said anything,
knowing it was his final hour.
The light burns upward,
it thickens and settles over the fields.
Around him, the villagers gathered
and stretched forward to listen.
Even before the sun itself
hangs, disattached, in the blue air,
I am touched everywhere
by its ocean of yellow waves.
No doubt he thought of everything
that had happened in his difficult life.
And then I feel the sun itself
as it blazes over the hills,
like a million flowers on fire --
clearly I'm not needed,
yet I feel myself turning
into something of inexplicable value.
Slowly, beneath the branches,
he raised his head.
He looked into the faces of that frightened crowd. 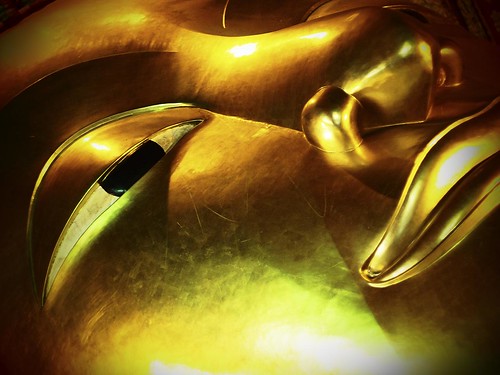 View All Poems by Mary Oliver

This is as much a story as a poem, a retelling of the final moment of the Buddha's life.

Mm. This simple affirmation of illumination at the moment of death continues to resonate... through the lines of this poem, and through the centuries.

I think of this every morning...

We are brought, by Mary Oliver's line, immediately to the dawn. Not the last dimming of light, but the beginning of the new day.

Knowing it is his last moment, with a life of great striving and penetrating insight behind him, "he might have said anything." Of all the possible philosophical summations and encapsulations, he chooses instead the radiant wisdom embodied by the sun, which lights and warms the whole world.

The poet seems stunned by such a clear, unencumbered statement with the Buddha's final breath. Stunned, we stumble into deeper awareness.

clearly I'm not needed,
yet I feel myself turning
into something of inexplicable value.

I love these lines. Contemplating the passage of death while affirming the fulness of light and life, somehow we, along with the poet, no longer stand at the center of the world's narrative.

When we really pay attention to the story being told all around us, a story that's been unfolding for ages, the attention shifts away from that perpetual certainty that it is all about "me." But rather than feeling empty or betrayed, we find ourselves alive and aware and filled with a bubbling glee. We find ourselves made of a gossamer-thin tissue of light.

These closing lines are so striking. We've had an entire scene laid out for us, villagers gathering to be present at the death of this great teacher. The weak and dying Buddha raises his head and looks into the faces of the crowd... and they are frightened. Now, why is that?

I imagine it is because of what they see in the Buddha's eyes: the great mystery, naked and unguarded in that last loving glance.