You stop to point at the moon in the sky

You stop to point at the moon in the sky,
but the finger's blind unless the moon is shining.

One moon, one careless finger pointing --
are these two things or one?

The question is a pointer guiding
a novice from ignorance thick as fog.

Look deeper. The mystery calls and calls:
No moon, no finger -- nothing there at all. 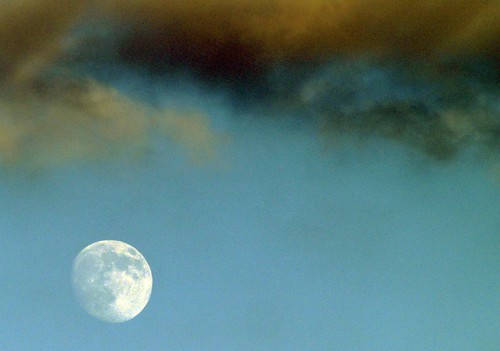 Here Ryokan is using a common teaching metaphor in Zen Buddhism -- the finger pointing at the moon. But what is being said with this imagery?

The awakened state reveals itself as a shining light, as a luminescence permeating the still field of the mind. There is a sense of light from an undefined "above," silence, a fullness of vitality, and deep rest.

In sacred poetry, particularly in Zen poetry, this is often expressed as the full moon in the night sky.

The full moon is Buddha-mind. It is the soft light that illumines the land below when all is at rest.

The finger is that which directs our awareness to the full moon -- the teacher, the tradition, one's religion, holy scriptures, spiritual practices.

Zen wisdom reminds us not to mistake the finger for the moon. While our "pointers" may be worthy of deep respect, we must never become so enamored that we forget the shining Goal to which they point...

But Ryokan takes this teaching a step further:

Look deeper. The mystery calls and calls:
No moon, no finger -- nothing there at all.

In the radical awareness of total Unity ("One moon, one careless finger pointing -- / are these two things or one?"), it becomes a foolish mental game to artificially distinguish between the moon and the pointing finger. That is, the path is not separate from its destination, the teaching is not separate from the goal. One leads into the other with no clear dividing line. They are one, not two. They are not even one; they are part of a unity that is outside of the isolation of numbers. "No moon, no finger -- nothing there at all."

We are, at last left, with the wide open mystery that "calls and calls."

You stop to point