Suppose you cut a tall bamboo

Suppose you cut a tall bamboo
in two;
make the bottom piece a woman,
the headpiece a man;
rub them together
till they kindle:
tell me now,
the fire that's born,
is it male or female, 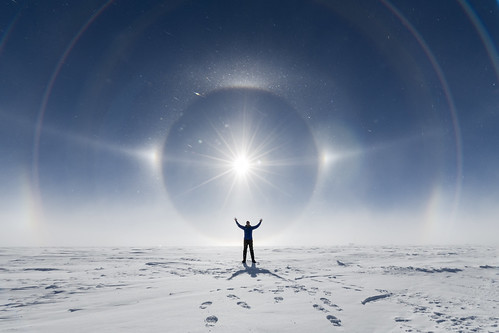 View All Poems by Devara Dasimayya

I really love the poetry of the great Virasaiva saints of India but, on the surface, this particular poem by Devara Dasimayya doesn't seem to have much to do with spirituality. Why is he talking about bamboo? And what does he mean when he speaks about making a piece of the bamboo "a woman" and a piece of it "a man"? Let's unfold the poem a bit and see if the meaning becomes more clear...

Certain yogic practitioners carry with them a stick or a pole, often made of bamboo, called a danda. This "tall bamboo" is more than a walking stick, it is a ritual object that symbolizes the shushumna or the subtle spinal column that is the primary energetic pathway of awakened spiritual energies. The practitioner of Yoga strives to awaken the Kundalini energy which commonly sits dormant at the base of the spine. When aroused, the Kundalini moves up the spine along the shushumna, which is often compared to a hollow reed or stalk of bamboo. When the fiery Kundalini reaches the crown, the individual awareness merges with cosmic consciousness -- the sacred marriage -- and the new life of enlightenment is experienced.

Returning to Dasimayya's poem, if you divide the "bamboo" of the spiritual spine "in two," the "bottom piece" is the seat of the feminine Kundalini energy -- thus you make it "a woman." The "headpiece" is associated with the masculine transcendent form of the divine, in yogic tradition often identified with the God Shiva -- making it "a man." So we have the female and the male, magnetized poles of a spiritual circuit within the individual

We then "rub them together / till they kindle." That is, if we continuously work to bring the energies of the feminine and masculine poles into contact, an electrical charge is built up, and eventually that spark gives birth to a "fire" -- the awakened Kundalini that runs up the spine with a rush of heat. When the female and the male poles merge, the bliss of union is rapturous, releasing a new radiant life within us.

The question Dasimayya asks: Is this divine child of enlightenment, this living fire born of the union of polarities, is it male or female? Can one truly say that enlightenment is somehow more masculine or feminine, that it belongs to only one end of the pole? No, the fire consumes everything, including the feminine and masculine ends of the pole. There is no male and female left, no duality, no separation. All that remains is the formless living fire of awakened awareness.

The question itself seems to be a refutation of the idea that one gender is somehow inherently closer to godliness or more capable of attaining enlightenment. Energies that we might identify as "male" and "female" are important to the awakening process, but each individual has both and must harness both in harmony. And enlightenment itself? It is beyond the dualities epitomized by gender. Enlightenment encompasses everything and is not limited by categories, like gender.

The Virasaivas were a highly egalitarian group, recognizing social -- and spiritual -- equality in all people, regardless of caste or gender.

Try rereading the poem now and watch the sparks fly!

Suppose you cut a