Teach me, my God and King,
In all things thee to see,
And what I do in any thing,
To do it as for thee:

Not rudely, as a beast,
To run into an action;
But still to make thee prepossessed,
And give it his perfection.

A man that looks on glass,
On it may stay his eye;
Or if he pleaseth, through it pass,
And then the heaven espy.

All may of thee partake:
Nothing can be so mean,
Which with his tincture (for thy sake)
Will not grow bright and clean.

A servant with this clause
Makes drudgery divine:
Who sweeps a room, as for thy laws,
Makes that and the action fine.

This is the famous stone
That turneth all to gold:
For that which God doth touch and own
Cannot for less be told. 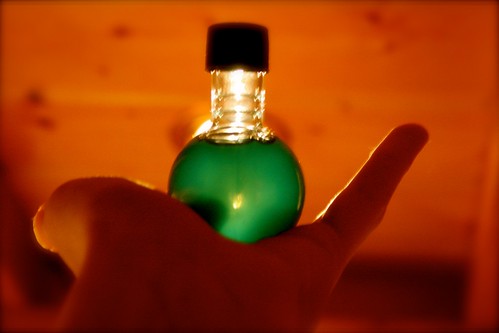 
View All Poems by George Herbert

First, this is a poem that MUST be spoken aloud. What might seem pleasant, but perhaps a bit bland on the page, takes on a surprising strength when spoken aloud. It has a delightful rhyme that should be savored on the tongue. You need to hear it, not read it.

The title -- The Elixir. I can't help but point out the Arabic origins of the word: It comes from al-Ikseer, which can literally translate as "the potent recipe." The word "elixir" came into European languages with the growing fascination with alchemy. ("Alchemy," also an Arabic word.) The elixir is the alchemist's secret drink of immortality. We find similar notions of a sacred drink that confers eternal life in all the world's spiritual traditions. The elixir is also at times referred to as the "philosopher's stone," that which transforms base metal into gold.

Some alchemical traditions, in both East and West, have pursued the elixir in quite literal, physical terms, seeking a substance that grants bodily immortality, something that actually changes lead to gold. Other schools understood this language on a more esoteric level; the immortality found is an immortality of the Spirit, the base metal of the lower self is transmuted to the gold of the divine Self.

But what is Herbert's elixir? His "tincture" is the inner bliss one discovers when every action is wholly dedicated to God:

And what I do in any thing,
To do it as for thee

This approach "makes drudgery divine." When we put our actions in the context of service to something greater then our own selfish ends, even the simplest and seemingly small task becomes a profound meditation. It becomes a new avenue for spirit to manifest in the world. It becomes a method through which we can know our true nature better.

The results or "fruits" of the action are not the real goal; it is the doing it itself, properly, with attention, that is the goal. The outcome is left to God.

Another way to imagine this is that every action, great or small, is a gift being offered to the Beloved. When we want to show our love through a present, we put thought into its selection and creation, we wrap it with care and creativity, and carry it to our loved one's door with a hopeful heart. We do it to give, not to get. Every action can be the same.

Anyone who has read the Bhagavad Gita will recognize immediate parallels with the sort of karma yoga taught by Krishna.

Who sweeps a room, as for thy laws,
Makes that and the action fine.

These lines about sweeping a room remind me of a quote by Brother Lawrence, who was a cook in a Carmelite monastery in Paris:

"And it is not necessary to have great things to do. I turn my little omelette in the pan for the love of God."

But discovering this elixir through action requires selflessness:

A man that looks on glass,
On it may stay his eye;
Or if he pleaseth, through it pass,
And then the heaven espy.

Okay, let's reword this for better understanding. We can paraphrase these lines as, "A man who looks in a mirror can stop and stare at himself; or he can pass through his own reflection and then see heaven." This seems to me to be saying that as long as we are fixated on ourselves and surface appearances, that's all we can hope to see. But when we let go of that self-obsession, move beyond our limited sense of identity and self-ornament, we finally see the wider, radiant world of Being we all are.

In other words, we must step out of the way, and let the action, whatever it is, flow through us, unhindered by ego or expectation. That's when magic happens. That's when we discover the elixir.