Published by Ivan M. Granger at 9:18 am under Poetry

From burweed
by Kobayashi Issa

From burweed,
such a butterfly
was born? 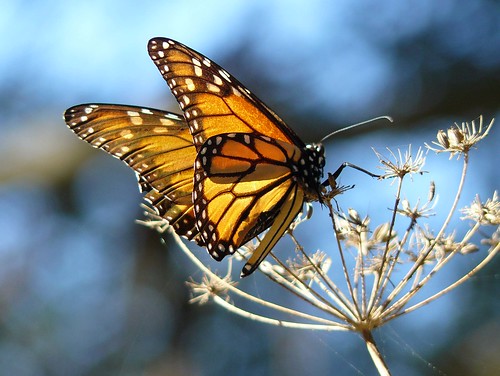 Haiku has such a powerful way of discovering great truth in the details of nature. It is a poetry of metaphor and surprise. Glimpse it for just a moment and you see the macrocosm reflected by the microcosm, the Eternal in the specific.

One should never be too casual or definite in interpreting the meaning of a haiku. It is like a dream; the meaning is felt, it is immediate, and it reflects something of yourself back to yourself. It resists being overly defined. But that won’t stop me from suggesting one possible way of understanding this haiku… 🙂

This haiku by Issa can be read as a poem of instant enlightenment. Issa is stunned to recognize that from “burweed” — the mind, the rough, mud-hugging “weed” filled with burrs of self-thought — such elegant, diaphanous life and freedom — the awakened self — can be born.

This begs the question, how can we bring the “butterfly” to birth? First, we need the Winter of spiritual practice and inturning (the gestation within the cocoon). And we must hold fast to the earth (the mud of the weed), to steadiness, to nature. All that is needed then is to simply wait for the new light of Spring to naturally awaken life, growth, transformation.

The sun is out in a cool autumn sky today. Even though it’s not the season, I’m sure if I really look I’ll discover a butterfly!

Kobayashi Issa, or simply Issa, is one of the best known and appreciated haiku poets.

Issa was born in Kashiwabara, in what is now part of the Nagano Prefecture in Japan. His father was a farmer. Issa’s mother died when the boy was very young and his father soon remarried. Issa’s stepmother mistreated him and, when he was fourteen, Issa was sent to Edo (Tokyo) where he studied haiku.

Although he gained some notoriety for his poetry early on, he struggled to get by financially and had to travel and work hard until his fifties. When his father died, Issa had further troubles with his stepmother who prevented him from inheriting his father’s property for some time. He eventually was able to claim his inheritance, however.

Though Issa’s life was filled with struggles — the death of his mother at an early age, the conflicts with his stepmother, his poverty, and the death of his own children — his haiku tend to celebrate the serene joys and simple spiritual moments of life.

11 Responses to “Kobayashi Issa – From burweed”