Published by Ivan M. Granger at 9:26 am under Poetry

Year’s end,
all corners
of this floating world, swept. 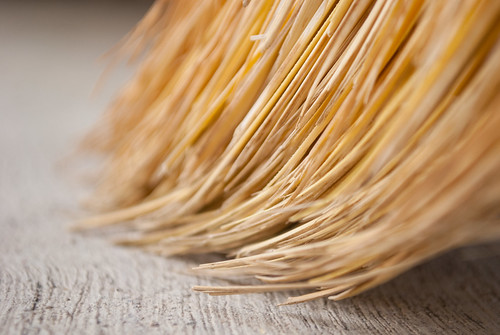 Perhaps it’s a little early to be speaking of the year’s end just yet. Most of us are still focused on upcoming holidays first, but I came across this poem this morning and decided it was worth sharing right away…

That final word — “swept” — you almost trip over it with its abrupt stop.

“Swept” can imply several things, such as a ritual year-end cleaning, everything put in its place and ready for the new activity of the new year. But I like to imagine Basho is speaking on a deeper level, suggesting the Buddhist realization that everything is fundamentally empty, free, “swept” clean of thing-ness. When perceived deeply, the entire world reveals itself to be a fluid, “floating” phenomenon of becoming and interconnection. No object is truly solid or stable in solitary existence, other than in relationship to perception. The outer world is found to be a symbolic game of the mind. At the heart of everything is a pure, still, blissful spaciousness, pregnant with awareness; but it is only through the activity of the mind that anything is born into the appearance of form.

At “year’s end,” at mind’s end, when the surface consciousness rests and its projections cease, the weight of things are “swept” away, leaving us standing in an amazing world that “floats” and dances upon open sky.

Reading this haiku, I don’t pick up the broom; I set it down. All corners, they’re already swept. Or I may just go through the motion of sweeping for the simple delight of movement.

Basho took his name from the Japanese word for “banana tree.” He was given a gift of a banana tree by a student and the poet immediately identified with it: the way the small tree stood there with its large, soft, fragile leaves. (See his banana plant haiku.)

Basho was probably born in 1644 in Iga Province outside of Kyoto, Japan. His father was a poor samurai-farmer.

As a teenager, Basho entered the service of the local lord, acting as a page. The young lord was only a couple of years older than Basho, and the two became friends, enjoying the playful exchange of haiku verses.

When Basho was still a young man, his friend and lord died. In reaction, Basho left home, abandoned his samurai status, and took to a life of wandering.

After several years, he settled in Edo (Tokyo), continuing to write and publish poetry. His haiku began to attract attention. Students started to gather around him. At about this time, Basho also took up Zen meditation.

Basho remained restless, even in his fame. A neighborhood fire claimed his small house in Edo leaving him homeless, and Basho once again took up the itinerant life, visiting friends and disciples, taking up residence for brief periods only to begin another journey. It was during this time that Basho composed some of his greatest haiku.