Jacopone da Todi – As air becomes the medium for light

Published by Ivan M. Granger at 8:00 am under Poetry

As air becomes the medium for light when the sun rises,
And as wax melts from the heat of fire,
So the soul drawn to that light is resplendent,
Feels self melt away,
Its will and actions no longer its own.
So clear is the imprint of God
That the soul, conquered, is conqueror;
Annihilated, it lives in triumph.

What happens to the drop of wine
That you pour into the sea?
Does it remain itself, unchanged?
It is as if it never existed.
So it is with the soul: Love drinks it in,
It is united with Truth,
Its old nature fades away,
It is no longer master of itself.

The soul wills and yet does not will:
Its will belongs to Another.
It has eyes only for this beauty;
It no longer seeks to possess, as was its wont —
It lacks the strength to possess such sweetness.
The base of this highest of peaks
Is founded on nichil,
Shaped nothingness, made one with the Lord. 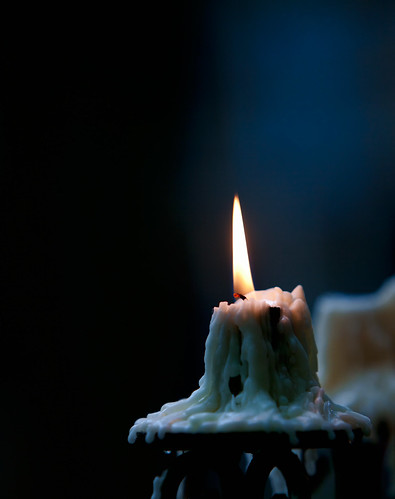 As air becomes the medium for light when the sun rises,
And as wax melts from the heat of fire,
So the soul drawn to that light is resplendent,
Feels self melt away…

What I find fascinating about these opening images is how much they sound like the sort of metaphors Indian yogic masters use.

With these simple, comprehensible images, we can begin to get an idea of how the soul is transformed in exalted states. In nearness to the Eternal, the soul, like wax near a fire, melts. The self is no longer a fixed, hardened thing, but something fluid, formless, dynamic. And, in this responsive, formless state, the soul loses its dull opacity, becoming clear, allowing the light to shine through it.

Its will and actions no longer its own.
So clear is the imprint of God
That the soul, conquered, is conqueror;
Annihilated, it lives in triumph.

The old, inanimate self melts away, and this new fluid self moves. But it moves naturally, not of its own accord. The liquid self moves as it is moved.

In yielding, it discovers its own life.

So it is with the soul: Love drinks it in,
It is united with Truth,
Its old nature fades away,
It is no longer master of itself.

This concept of yielding, of freeing oneself of will, is a difficult one to understand and accept in any age, but especially so in the modern era when accomplishment through strong will is culturally idolized.

The soul wills and yet does not will:
Its will belongs to Another.

The most immediate objection is that without will, we can do nothing. On a certain level, we prove our existence by doing, by taking action in the world, right? There have been enough statements by mystics and saints throughout the world about the importance of non-will, that we should explore this question more deeply…

Deeply examined, we find that will is not what we thought it was. Or, rather, that there are different expressions of the will. We can say that will is volition or the impulse to action, or we might broadly define it as freedom of choice, as in “free will.”

Mystics often use phrases like “self-will” to express a more fundamental understanding of what the will is and how it works. You can say that self-will is selfish will, in opposition to the will to be of service, for example, but that doesn’t quite get at the heart of the matter. Self-will is will that is tainted by the petty self, the unmelted self, or the ego. Self-will is not just selfish will. It’s quite possible to perform great philanthropic works and have it still be from self-will. Self-will is will that is under the control of the ego, compels action that serves the ego, and compels action that reinforces the ego. Self-will renews the trance of the ego.

Consider, is there a way to drop this self-will, to be free from its clutches, without becoming an inactive lump on the couch? Is there a form of will that does not originate with the ego and constantly return our attention to it? Finding this second will, what is it like? This other will is profound, immense, powerful, yet not our own. It is a form of will that does not serve the little self. It is not possessed by us, and it does not concern itself with possession of things or experiences. To unleash this will in our lives requires an elegant balance between yielding and stepping forward, between passivity and attentive action, between selflessness and presence. Actions take place through us, but we are not the actors. What we normally think of as the self is not directing the action.

This frees up a great portion of psychic energy, and we become awestruck witnesses to life playing out through us and all around us — a vision of immense beauty!

It has eyes only for this beauty

Little is known with historical certainty about the life of of Jacopone da Todi. He was born Jacopone Benedetti to a wealthy family in the town of Todi, Italy. As a young man he entered a career as a notario, combining the skills of an accountant and a lawyer. And he married. All of these elements suggest an early life of modest wealth.

A popular story from an early religious biography suggests that his life drastically changed when, at a wedding feast, a balcony collapsed and mortally wounded his young wife. Devastated, Jacopone abandoned his career and gave away all of his possessions. This event is questioned by modern historians, however, as possibly being manufactured for religious drama. But something happened to his wife and prompted his radical conversion.

He become a wandering penitent and a source of public ridicule. Jacopone eventually joined the Franciscan order. Among the Franciscans, he discovered his gift for poetry. Brother Jacopone became a leader of the Spirituals faction of Franciscans who dedicated themselves to the ideal of radical poverty.

The Franciscan Spirituals got caught up in the ugly politics of papal succession of the time, and Jacopone was imprisoned for five years for his opposition to the election of Pope Boniface VIII. Throughout this time, Jacopone continued to write his ecstatic and mournful poems that touch upon the deepest personal encounters with divine Love.

With his release on Pope Boniface’s death, Jacopone retired to a hermitage near Orvieto. He died on Christmas Day in 1306.