Naropa – The Summary of Mahamudra

Published by Ivan M. Granger at 11:14 am under Poetry

The Summary of Mahamudra
by Naropa

Homage to the state of great bliss!
Concerning what is called Mahamudra
All things are your own mind.
Seeing objects as external is a mistaken concept;
Like a dream, they are empty of concreteness.
This mind, as well, is a mere movement of attention
That has no self-nature, being merely a gust of wind.
Empty of identity, like space.
All things, like space, are equal.
When speaking of ‘Mahamudra’
It is not an entity that can be shown.
There the mind’s suchness
Is itself the state of Mahamudra.
It is neither something to be corrected nor transformed,
But when anyone sees and realizes its nature
All that appears and exists is Mahamudra,
The great all-encompassing Dharmakaya.
Naturally and without contriving, allowed simply to be,
This unimagined Dharmakaya,
Letting it be without seeking is the meditation training.
But to meditate while seeking is deluded mind.
Just as with space and a magical display,
While neither cultivating nor not cultivating
How can you be separate and not separate!
This is a yogi’s understanding.
All good deeds and harmful actions
Dissolve by simply knowing this nature.
The emotions are the great wisdom.
Like a jungle fire, they are the yogi’s helpers.
How can there be staying or going?
What meditation is there by fleeing to a hermitage?
Without understanding this, all possible means
Never bring more than temporary liberation.
When understanding this nature, what is there to bind you?
While being undistracted from its continuity,
There is neither a composed nor an uncomposed state
To be cultivated or corrected with a remedy.
It is not made out of anything
Experience self-liberated is dharmadhatu.
Thinking self-liberated is great wisdom,
Non-dual equality is dharmakaya.
Like the continuous flow of a great river,
Whatever you do is meaningful,
This is the eternal awakened state,
The great bliss, leaving no place for samasara.
All things are empty of their own identities.
This concept fixed on emptiness has dissolved in itself.
Free of concept, holding nothing in mind,
Is in itself the path of the Buddhas.
For the most fortunate ones,
I have made these concise words of heartfelt advice.
Through this, may every single sentient being
Be established in Mahamudra.

— from The Songs of Naropa: Commentaries on songs of Realization, Translated by Khenchen Thrangu Rinpoche / Translated by Erik Pema Kunsang 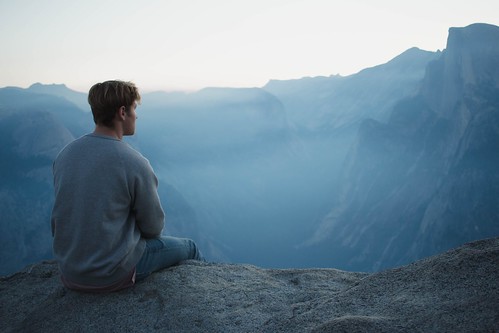 My wife and I first moved to Boulder, Colorado in the early 1990s. We were young and felt like adventurous vagabonds, exploring the world by moving around. Several things drew us to the area, including the natural beauty of the Rocky Mountains, better work opportunities than in our home state of Oregon, as well as the spirituality, creativity and health-focus of community.

One other thing drew us: Naropa University, a school in the area well known for its poetry and psychology programs, combined with classes on meditation and Eastern philosophies. Ironically, we never attended classes there, but we have friends who are graduates, and the school has helped to shape Boulder culture in beautiful ways.

Yet I don’t think I have ever featured a poem by the great Buddhist master Naropa, until today.

Concerning what is called Mahamudra

Mahamudra literally translates as “the Great Seal.” This term is rich in meaning, especially within Tibetan Buddhism. We might say that Mahamudra is the clear and enlightened recognition of all levels of reality.

We can think of it as a “seal” in that it has the stamp of confirmation. This is unfettered awareness of how reality really is.

Mahamudra is both the goal and it is also the practice or the pathway to reach that goal.

All things are your own mind.
Seeing objects as external is a mistaken concept

This is a difficult one for most of us reared within the Western mindset that has a primarily materialistic understanding of reality. Even if we hold to religious or spiritual ideals, that relationship to the world around us as a physical and sensory experience is often quite ingrained.

So what do we make of statements like “all things are your own mind”? How can external objects not be external?

We can read a lot of Eastern philosophy and begin to build a conceptual framework that allows a statement like that to seem less absurd, but at best it is a fragile idea that comes under heavy assault when we are confronted with life’s next intense, apparently external challenge. The conceptualizing mind can’t fully encompass this notion, no matter how subtle and refined we think it out.

The problem for the intellect is that, as our meditation deepens and the mind clears, this is precisely what we perceive. Everything we imagine to be outside of ourselves is actually within ourselves. And everything we think of as tangible, fixed, and “real,” is actually revealed to be merely a surface appearance that is part of a deeper, highly fluid reality.

Naturally, we must explore what the mind is. We often imagine that we are the mind, that the mind is the self. Thinking that, we have little or no control over the mind. But the mind isn’t really a lasting “thing” is ourself or exists outside of ourself. What we think of as the mind only exists when the awareness is in motion.

This mind, as well, is a mere movement of attention
That has no self-nature, being merely a gust of wind.
Empty of identity, like space.

When we bring the awareness to deep stillness, we discover that the mind doesn’t exist at all. Awareness remains, but mind is nowhere to be found.

It is like the wind: The air is always there, but the wind only exists when the air is disturbed and in motion. Its true nature is wide open, reaching in all directions at once.

There the mind’s suchness
Is itself the state of Mahamudra.

In Buddhist writings, we often come across the odd word “suchness” or “thusness.” This is a translation of the word Tathata. Tathata is the way a thing truly is beyond the ability of names or concepts to define it. It is the true, radiant, blissful nature of reality.

Naropa is affirming that the mind’s true nature, that is, full and open awareness, is nothing less than the full embodiment of reality.

It is neither something to be corrected nor transformed,

So often in spiritual practice we try to bring the mind under control. We work so hard to keep the mind focused on “spiritual” things and away from distractions or fixations. And, yes, that can be important.

But Naropa is giving us a deeper teaching. The shifting surface focus we call mind is only problematic when we imagine that is all that mind is and all that we are. As we begin to recognize the full awareness, we see that its expanse already encompasses everything, needing nothing added or subtracted, while the phenomenon of “mind” is simply the shifting of currents that settles of its own accord when we let it.

But when anyone sees and realizes its nature
All that appears and exists is Mahamudra,

Another key Buddhist term is then mentioned: Dharmakaya–

The great all-encompassing Dharmakaya.
Naturally and without contriving, allowed simply to be,

Dharmakaya literally means “truth body.” It is one’s true spacious being underlying all appearance or phenomenal experience. It is the foundation ground of self and being experienced by awakened masters.

Naropa is showing how these important concepts are linked, that their elevated states actually flow into each other and reveal themselves to be the same.

Letting it be without seeking is the meditation training

This, I think, is Naropa’s core statement for the seeker: Don’t seek. Instead, recognize the true nature of things already present. Don’t look to the horizon. Wherever we are, just stop and see. That’s the tricky part. Before we can see, we must first stop. We don’t need to dominate the mind and force it to stop, but we do need to stop being carried away by every little thing caught in the shifting movements of the mind. That’s when the vision clears and we see all around for the first time.

While neither cultivating nor not cultivating
How can you be separate and not separate!

We don’t actually need to change anything about ourselves. Rather, we need to settle into ourselves. We need to be as we are. When we do that, then our outer selves naturally become an expression of the true being we actually are — no effort required to coax or curtail our actions and energies.

Like the continuous flow of a great river,
Whatever you do is meaningful,

Rather than an endless effort of trying to catch and correct every thought and emotion (and the actions that proceed from them), Naropa’s teachings allow us to recognize our destination in this very moment, discovering our true nature in our very selves right now.

Through this, may every single sentient being
Be established in Mahamudra.

PS – To all of my friends near the fires in California, be safe.