Loghman of Sarrakhs cried: "Dear God, behold
Your faithful servant, poor, bewildered, old--
An old slave is permitted to go free;
I've spent my life in patient loyalty,
I'm bent with grief, my black hair's turned to snow;
Grant manumission, Lord, and let me go."
A voice replied: "When you have gained release
from mind and thought, your slavery will cease;
You will be free when these two disappear."
He said: "Lord, it is You whom I revere;
What are the mind and all its ways to me?"
And left them there and then -- in ecstasy
He danced and clapped his hands and boldly cried:
"Who am I now? The slave I was has died;
What's freedom, servitude, and where are they?
Both happiness and grief have fled away;
I neither own nor lack all qualities;
My blindness looks on secret mysteries --
I know not whether You are I, I You;
I lose myself in You, there is no two." 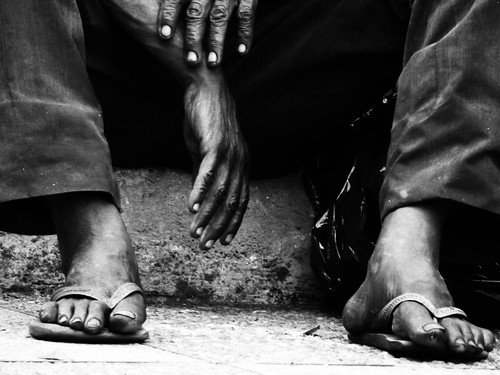 This paints a striking image, doesn't it? An old man, a slave all his life, bent, worn, prays to God for his freedom.

My first question: Whom is the old man slave to? He is not begging some human master for freedom. He is asking God. So does that mean he is God's slave? Perhaps. A lot of religious language -- Muslim, Christian, Hindu -- refers to the faithful as slaves or servants of God. But that imagery can also make us uncomfortable. It can conjure images of a cruel and arbitrary God. It does, however, convey the absolute dedication of the servant, a willingness to merge the personal will with the Divine.

Another way to look at the old man's servitude is that he has been a slave to the world. Remember that "the world" is not reality, it is consensus reality, a false and limited idea of reality. The world is reality hidden by the heavy blanket of our mental projections. At best, the world gives us only a rough idea of the contours of reality in its fulness... that is, until we stop perceiving through the imperfect filter of the mind under the control of the nafs>/i> (the ego).

He [the slave] said: "Lord, it is You whom I revere;
What are the mind and all its ways to me?"

Having spent himself totally in the immense labor of his life, the old slave has little reason left to cling to the false images of the mind. So he lets that old habit fall away and "in ecstasy / He danced and clapped his hands..." This one act of exhausted courage is all he needs for liberation.

Notice also that freedom was always available to the slave. He could have had his freedom at any time, at any point in his long life. But the reality is that we often don't find the courage, or even think to ask the questions that lead us there, until we've worn ourselves out in the endless efforts of slavery. This is why I sometimes say that the purpose of spiritual practice is to wear yourself out. We need to come to a point when we grow weary of our own patterns and compulsive ways of seeing ourselves that we finally, wearily give ourselves permission to take that single step beyond the mind's clutches. The rigors of life alone will do that just fine, but it can be a slow, grinding process and we have to walk our path with open awareness and open heart, which is not easy amidst the onslaught of daily challenges. Spiritual practices allow us to internalize that intensity while imbuing it with a purpose that encourages us to keep heart and awareness open.

But all that's really needed is that one step.

Then, free from that chained sense of reality, all sense of effort falls away. Even the sense of self falls away. All that remains is the blissful sense of melting with divine reality.

"Who am I now? The slave I was has died;
What's freedom, servitude, and where are they?
Both happiness and grief have fled away;
I neither own nor lack all qualities;
My blindness looks on secret mysteries --
I know not whether You are I, I You;
I lose myself in You, there is no two."