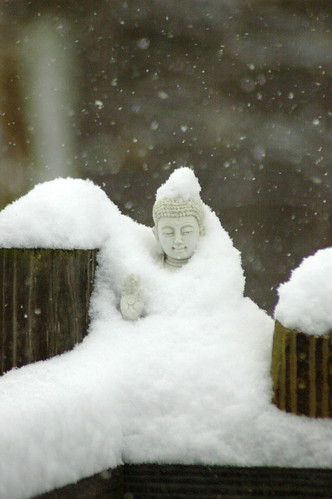 
View All Poems by Matsuo Basho

I am sitting here at my computer reading poetry in snow boots. I just came in from shoveling the sidewalk. It looks like we might get two feet of snow today.

My car is in the shop and probably needs to be replaced. After 15 years of loyal service, it died on the road just as the first snowflakes started falling yesterday. In the space of a few blocks of driving it went from running fine, to making a strange noise, to completely dying. I had to jog half a mile in the snow to my home because I don't have a cell phone, call a tow truck, and then watch as our car got hoisted up on the truck bed, and ride with it to the repair shop.

Rather than going into anxiety about the whole situation in the midst of the increasing snow, I found myself... dare I say it?... content. Even entertained. Accepting the situation for what it is, I rode along with the events. It became a sort of adventure.

I'm being told that it's probably not worth the cost of repairs at this point, so in a few days, when we dig ourselves out, I will be shopping for another car.

A longtime car becomes a sort of family member, like a pet or trusted workhorse. Some people may feel it's silly, but I'm fond of that old car and there is a bit of sadness at saying goodbye. I hope to adopt a new wheeled family member who becomes just as much of a friend.

Thankfully, past chronic fatigue patterns have been in abeyance for most of the past year, so I have been working more hours at my day job and I have a small amount saved that can now be used as a down payment for our next car.

When events just happen and there is no avoiding their cascading onslaught, sometimes the best option is just to grow still, enjoy the scene, and laugh as we are buried.

So, with no car at the moment and nearly two feet of snow on the ground and with more snow falling, it is a good day to pause and go snow-viewing...


That phrase "snow-viewing" may seem rather odd, if poetic, but it is actually a playful twist on the Japanese practice of tsukimi or moon-viewing. In Japan, there is a tradition of moon-viewing in autumn. Towns have moon-viewing festivals, a family might invite friends over for moon-viewing. To me, as an outsider, that sounds like a beautiful way for all of society to slow down and appreciate the masterful artwork of nature, communing with the rhythms of the world. Basho's snow-viewing is an expansion of that idea -- inviting a friend to step outside in order to appreciate the beauty of a recent snowfall in quiet companionship and shared ritual.

Particularly the Zen poetry, snow often carries with it the suggestion of deeper meanings we might want to explore.

When the difficulties and coldness and enforced internalization of winter are emphasized, snow can represent the struggles of spiritual practice that precede the spiritual awakening of spring.

When the silence that settles of the world bathed in snow is emphasized, it can represent the perfect stillness of mind that occurs in true meditation.

When the quality of blanketing all things in a uniform whiteness is highlighted, snow can be seen as an allusion to the unifying white or golden-white light that shines through everything, the light one perceives when the mind awakens.

This haiku by Basho can carry variations of all of these meanings, but especially the last one.

Notice the joke in these lines: By viewing the snow we become buried in it -- and that is what Basho is really inviting us to do. With a lot of snow (and a dash of wit), Basho might be saying that by viewing something deeply, we become the beauty we perceive. Seeing the universal radiance, we become the radiance. Hearing the silence, we become the silence. Witness the eternal, and we become consumed by it, the ego self becomes lost in the blanket of white that covers everything, making all of existence one.

Have a beautiful day, with or without snow! And be warm and safe!