Dawn is a Friend

Dawn is a friend who comes to rouse the lover from grief,
And enemy, for from his pain he wants no relief.

Without separation's pain how can he be aware
Of the Beloved's presence in the perfumed air?

The deep night breathes quietly as a woman sleeping;
In the silence of it song's harvest spirit is reaping.

With the rising of the sun the world's day begins,
The day of the market and gossip -- the sowing of sins.

In the daylight of the world the lover is like a fish
Hooked and thrown up on the burning sand to writhe and perish.

He longs for the ocean of night with its islands of stars,
And the white hand of his Beloved that heals the day's scars.

In the silence continues the siege of the Beloved's beauty;
And his soul's sigh steals out and goes on sentry duty. 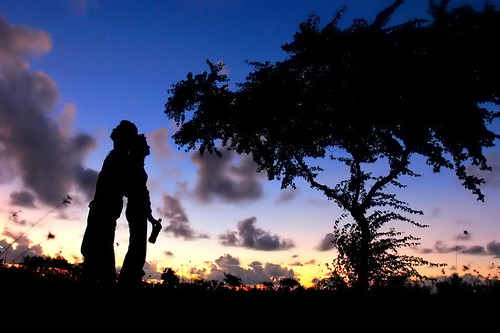 
View All Poems by Francis Brabazon

Not long ago I stepped in from watching the morning sun, bright, cool, and clear in the winter sky. This poem, with it's dawn imagery, caught my attention.

Dawn is a friend who comes to rouse the lover from grief,
And enemy, for from his pain he wants no relief.

That first line of the couplet invites us to breathe easier, for dawn rouses the lover, the spiritual seeker, from his grief. But then the second line turns our expectations upside-down and says dawn is actually an enemy because the lover doesn't want relief from his pain. Why? What is his grief? Why is it experienced at night? And why does he want no relief from that pain?

Many forms of Sufi practice involve zikr, or "remembrance," which is usually understood as meditation and the chanting of the holy names of God through the middle of the night. When the relationship with God is a love affair, night is the time of secret trysts ("The deep night breathes quietly as a woman sleeping"). Night is the time of the most intense and intimate spiritual practice.

The challenge in most spiritual practice is that it brings us, at some point, to an extremely vulnerable stage when we have to confront the foundation of suffering -- which is the perception of separation from God. All of life's pain ultimately stems from that basic sense of separation. Most people instinctively run from that awareness, spend their entire lives in constructing elaborate psychic ways of blocking that awareness. But the crazy lovers of God turn around, night after night, and sit themselves down on the cliff edge and sing out into the great gulf. Though frightened, the true lover stares endlessly into that great space… until suddenly an amazing thing happens -- in a flash the emptiness is seen to be not a distance but a connection, a joining. The gulf is itself the bridge spanning the distance, and we discover that we can walk upon it, that there was, in fact, never any separation or distance.

Without separation's pain how can he be aware
Of the Beloved's presence in the perfumed air?

Separation is itself the connection to the Beloved.

And don't you love that closing couplet...?

In the silence continues the siege of the Beloved's beauty;
And his soul's sigh steals out and goes on sentry duty.>/i>

The words build up to that final rhyme in such a sensuous way...

Dawn is a Friend