This cold winter night,
that old wooden-head Buddha
would make a nice fire 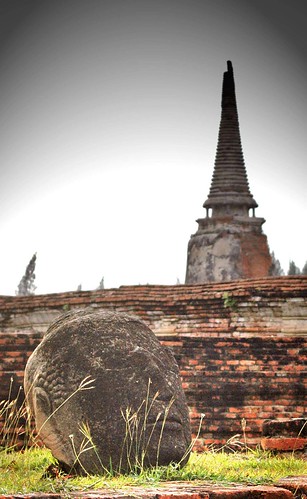 Chilly weather this morning. Makes a person cast about for a source of warmth... Hmm...


Every time I come across this haiku it makes me laugh. It works beautifully on several levels and can suggest almost opposite meanings. Superficially, we are contemplating an act of sacrilegious vandalism -- hungrily looking at a large wooden Buddha head, perhaps it is neglected or fallen, and fantasizing about setting it on fire for a little comfort.

A more proper Zen reading of the haiku see it as embracing that iconoclasm, telling us not to assign too much importance to religious symbols, even the Buddha himself, since they point the way but are not the goal itself. This is the equivalent of the classic Zen koan, "If you meet the Buddha on the road, kill him."

On the other hand, the head engulfed in flames is a common image in Asian iconography to represent enlightenment, a variation on the nimbus or halo -- so the haiku can just as easily be saying something about warming oneself through spiritual illumination.

The haiku shocks, it even offends, at the same time that it inspires awakening -- a masterful joke!