winter moon --
bowing to a monk
on the bridge 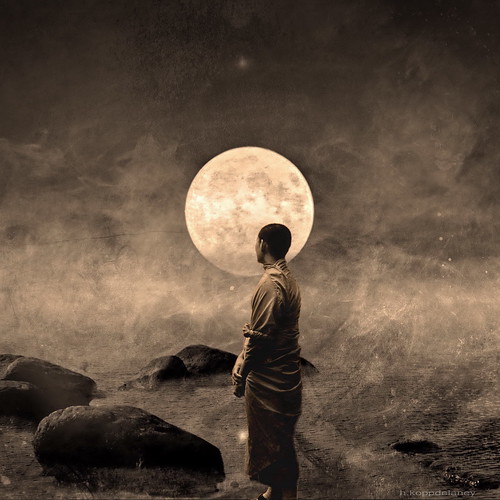 I couldn't help but notice the full moon last night hovering in the cool winter sky.

Something about a "winter moon" seems more moon-like, evoking the moon at its brightest, purest, and perhaps most aloof. There is a crystalline clarity to the moon in a winter sky.

This is the moon of awakened awareness, shining sartori.

The bridge itself seems significant. In Asia, we have "moon bridges," highly arched bridges that form a full (moon) circle when seen in reflection upon the water's surface. So, is the bridge the moon? Or is the moon a bridge?

A bridge is an interstitial space, joining two realms separated by flowing water, yet the bridge itself belongs to neither side. It represents a pathway between worlds and states of mind. The bridge is connection, pathway, and transformation.

Let's bow to that winter moon-bridge. Perhaps it will bow back to us.