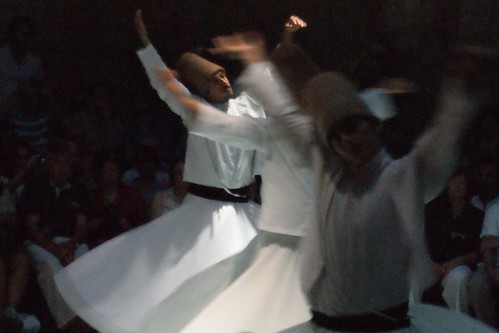 This is one of those powerful poems. These lines can catch us in a dark moment, uplift when we feel stuck or lost, lead us into greater presence...

At the still point of the turning world.

That image of movement, dancing amidst stillness, right at the center point. The meeting point, not only of past and future, but of all things.

Certain ideas -- important ideas -- are spoken of so often within spiritual and religious dialog that the words start to lose their meaning. Words like "the present," "centering," "here and now..." After one has read enough books or listened to enough talks, phrases like that become expected and slip by without really registering any more.

That is when poetry comes to the rescue.

Neither from nor towards; at the still point, there the dance is...

New reformulations of words and images, unexpected and lovely, gives us new eyes and new ears. We are pleasantly startled out of our mental insulation and the truth behind the word touches us anew, more deeply, with new suggestions of meaning.

A really good poem startles us out of our endless thoughts and brings us into an open state in which we encounter meaning more directly and immediately.

A truly masterful poem brings us to the still point. And there, we dance.

Except for the point, the still point,
There would be no dance, and there is only the dance.

For me, this is one of those poems.

At the still point