Ha! What is this dance of bliss (from Faust)

Ha! What is this dance of bliss
Cascading through my senses?
I feel new life, holy rapture
Burning through my nerves and veins.
Was it a god who shaped these symbols
Summoning this inner ecstasy,
Filling my impoverished heart with joy,
And revealing, through some mysterious impulse,
Nature's secret sinews
surrounding me?

Am I a god? I am filled with such light!
In this pure array of emblems I see
Nature's workings laid bare before me.
Only now do I comprehend the sage's wise words:
“The realm of spirit is not barred.
It is your mind that is closed, your heart that is lifeless!
Student, rise without fright,
And bathe your earthly breast
in the rosy dawn's light!”

As all things, one in one, are woven,
Each in the other works and lives and is whole!
While heavenly beings climb and descend
Passing down their golden pails,
And with their incense-pinioned wings
All heaven and earth are blessed;
They sing in symphony
through all things! 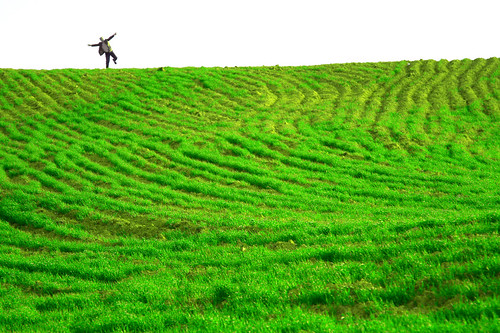 This poem is a selection from Goethe's masterpiece, Faust. The legend of Faust has been in circulation since the early Renaissance and is, in many ways, a foundational myth of modern Western culture. Faust himself is the quintessential mad scientist and modern-day wizard. He is a seeker and a philosopher who oversteps all bounds in his passionate quest. His journey is complex, taking us to uncomfortable places, spiritually and culturally.

Faust's tale, in its bare form, involves a man in search of secret knowledge. The early telling of the Faust legend was framed as a morality tale in which Faust sells his soul to the devil in order to unlock the secrets of nature and gain miraculous powers. This is the classic “Faustian bargain.” Amidst the mental and spiritual upheavals of the Renaissance, the story of Faust's magical feats amazed and entertained, while his final downfall reassured audiences with the restoration of social norms.

In the hands of Goethe, however, writing at the beginning of the Age of Enlightenment, Faust's tale is transformed into an exploration of the emerging modern mind at the threshold of unknown realities and uncertain morality.

This new Faust seeks something greater than magical powers, he seeks transcendent knowledge—gnosis. He is desperate to rise above the mundane world, which has been drained of meaning. The old medieval worldview has failed and new truths must be sought by daring minds.

As with Faust's earlier incarnations, Goethe's protagonist still craves secret knowledge, but he is less concerned with gaining magical power over reality as he is with witnessing the hidden truth underlying reality.

Goethe's Faust yearns to behold the whole of existence in one transcendent visionary experience, which he describes as “the sustaining Moment.” To attain this, he is willing to sacrifice everything, his old ideas, his place in society, his morality, perhaps even his soul. For this modern Faust, heaven without meaning and transcendence is worse than hell.

Faust is recast as a modern-day Job. Initially, Faust's soul and purpose are pure, so much so that God wagers with the devil that Faust cannot be corrupted. The devil then appears to Faust as Mephistopheles, revealing secret knowledge to Faust, while steadily tempting him away from a strict moral path. That's the tension at the heart of this story, leading to multiple tragedies.

Throughout, we must ask ourselves, is the moral life Faust has abandoned of real value if it was without meaning? Can it even be called a truly moral life, or had he merely been following convention? How far must one step beyond the bounds of social propriety to discover truth? Does the pursuit of truth justify selfishness or harm to others?

Despite his misdeeds and inner turmoil, Goethe's Faust can be seen as heroic. He is at times selfish and cruel, yet he courageously holds to his quest for truth. Faust has been transformed into an anti-hero, championing the newly emerging modern mind that seeks knowledge unshackled by religious and social convention. Faust is desperate to awaken into a new consciousness, to comprehend the hidden workings of reality and his own being, but to do so he must step outside the social order and accepted ways of thinking.

It is telling that, in spite of his deal with the devil and the many tragedies that follow, Goethe's Faust is ultimately welcomed into heaven.

Through Faust, Goethe has given us a manifesto, a proclamation of freedom for the mind and spirit. Yet he does not ignore the darker avenues through which the solitary seeker may stumble on his journey. Goethe is not writing a simple morality tale of good versus evil; instead, he sketches a complex, often cruel world populated by imperfect individuals, and in the midst of that he places a flawed but sincerely seeking individual.

I read Goethe's Faust as a defining meditation on the modern struggle for meaning, genuineness, and identity.

We can read this selection from Goethe's Faust as a template for understanding the ecstatic experience.

Ha! What is this dance of bliss
Cascading through my senses?

The first thing that catches our attention is the way Faust's bliss is not static. It dances, it rushes, it cascades. Bliss is not some flat feeling. It moves and changes. It interacts with us and our own shifting awareness. It is alive.

The description of it flooding through the senses is a reminder that spiritual ecstasy is not some disembodied idea of the mind. Bliss is felt in the body, as well as the soul. Frequently we assume that spiritual experiences are intangible phenomena and, therefore, easily dismissed. But profound experiences of spiritual ecstasy are perceived within every level of one's being, including the physical. It is not inaccurate to say that bliss is sensual as well as spiritual.

Each line here reveals something worth contemplating to better understand spiritual bliss.

Ecstatic opening, when first experienced, is likened to awakening from a lifelong slumber. It is a complete rebirth and renewal. It is nothing less than new life.

Filling my impoverished heart with joy...

The heart and the breast are referred to several times. In such moments of rapture, the heart is flooded with joy. The heart overflows with an indescribable delight and a radiant love.

And revealing, through some mysterious impulse,
Nature's secret sinews
surrounding me

In his ecstasy, Faust exults more than once at the revelation of nature's secrets. Beyond mere insight into the workings of material nature, he is witness to the nature of reality itself. He glimpses how existence is structured and functions, how it emerges from an underlying foundation of being.

This is a shocking question to ask in any culture. To some, it seems blasphemous or delusional. Yet mystics keep asking variations of this troubling question.

In states of spiritual ecstasy, the individual sense of self melts into the boundless Divine. Where does one's self end and God begin? Are they separate at all? To proclaim oneself a god in order to feed the ego is obviously narcissistic and delusional, but to honestly give voice to the uncomfortable question at the heart of genuine communion, well, that's uncertain territory. Faust, the iconoclast, brazenly asks the question.

I am filled with such light!

As all things, one in one, are woven,
Each in the other works and lives and is whole!

This is Faust's encapsulation of his vision of unity. He is witness to the workings of nature. He sees that nothing is separate. All things are, in reality, interconnected and have a shared being. In a world that feels broken and in conflict, there is yet an underlying wholeness.

This is the foundational insight of any true mystic. Seeing this, we recognize that, despite surface appearance, all of reality expresses an inherent harmony.

All heaven and earth are blessed;
They sing in symphony
through all things!

For Faust, his moment of ecstasy is not the end of his journey, but his initiation into a deeper phase of seeking and realization. He is then faced with the challenge of how to live according to this new vision, how to embody a stable expression of that reality while still negotiating the complexities and restrictions of society.

Faust takes a road that is at times morally questionable, but his firm commitment to true wisdom ultimately leads him to a heaven that few who follow convention will attain.

In Goethe's Faust the modern seeker has found a flawed but faithful champion.

“...Student, rise without fright,
And bathe your earthly breast
in the rosy dawn's light!”

Ha! What is this