Reflected
in the dragonfly's eye --
mountains. 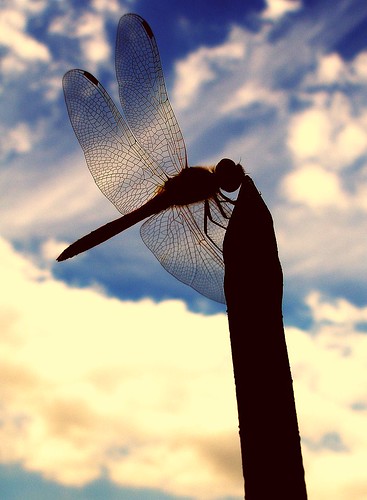 To appreciate the depth of this haiku, imagine the qualities of a dragonfly. It is beautiful, ephemeral, almost ethereal. Its wings are translucent, yet glisten with rainbow colors when they catch the light. On summer days it darts about, almost impossible to catch, then hovers still, in midair, contemplating the world about it.

And its eyes, in Issa's haiku, reflect.

One way to understand this poem is that the dragonfly represents the mind become self aware, resplendent, delighting in its intangible beauty. It darts here and there, and then stabilizes. In recognizing its own insignifigence, it becomes alive to a world of wonder and immensity that surrounds it.

In this way, even a dragonfly's minute eye reflects the grandeur of the mountains. The mind, in its stillness, in recognizing its nothingness, manages to reflect the immensity of eternity.