The Lord is in Me

The Lord is in me, and the Lord is in you,
As life is hidden in every seed.
So rubble your pride, my friend,
And look for Him within you.

When I sit in the heart of His world
A million suns blaze with light,
A burning blue sea spreads across the sky,
Life's turmoil falls quiet,
All the stains of suffering wash away.

Listen to the unstruck bells and drums!
Love is here; plunge into its rapture!
Rains pour down without water;
Rivers are streams of light.

How could I ever express
How blessed I feel
To revel in such vast ecstasy
In my own body? 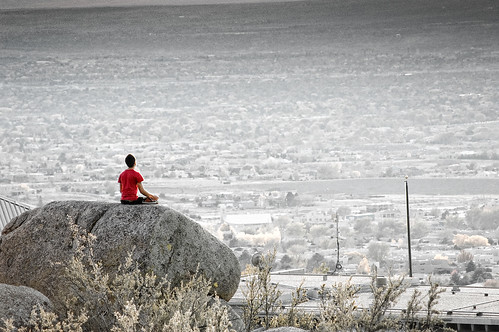 View All Poems by Kabir

I spent much of my 20s in retreat, looking for remote places to live. Thankfully, I have an adventurous wife who was a bit of a vagabond herself. For several years we lived on the island of Maui. There we rented a small cabin along the slopes of Haleakala. When I wasn't working, I'd walk barefoot among the eucalyptus forests with my two dogs. I discovered a natural rock cave hidden in a slope among the trees, just big enough for me to sit upright in. I'd hike there to sit and meditate, while my dogs roamed or napped nearby.

I am not claustrophobic, and the cave was not deeply recessed, but feeling the rock and earth pressing down around me, would trigger an instinct to hop out and take a gulp of air. Meditation in a cave, within the embrace of the earth, can be like sitting with death. It is like being buried. Or in the womb, waiting to be born. Yet it is so profoundly quiet. When the body finally settled down and the fluctuations of the mind calmed, I would become so sweetly still and rooted.

Winter doesn't have the same meaning in Hawaii as it does in much of the world, but it was in winter, there in Hawaii, in my 32nd year, during a moment of spiritual desperation, that some part of me just... opened up. The person I normally thought of as "Ivan" ceased to be. And I was flooded with the most amazing sense of bliss and light. It rained down like cool water from above. Then it was like a flood. Then a warm fire glowing majestically in my heart. Everything, all the world, was seated in my heart. That soft sound ringing at the base of the skull became a music that filled my awareness.

It was as if all my life I had been a tight bud and assumed that was my nature. Then, in an instant, I'd blossomed -- and found I was an entirely different, open being.

I knew what an unfocused mess my life was, so how had this come to me? But then I saw that it hadn't come to me at all. Nothing had actually happened or changed. I realized that this fullness and bliss is simply what we are, what the whole universe is, beneath the surface appearances. I had not acquired some unique, new awareness or experience, I just finally recognized what already was.

I remained steadily in that blissful awareness for months. Normal social interactions, work, these were a challenge at first, but I slowly began to reconstruct an Ivan-like mask as a way to more easily interact with the world. I didn't feel it was my path to remain blissed-out and aloof. So I let it become a game, pretending to be Ivan, carrying on with Ivan's life. After a while, I noticed days when I wasn't pretending. I found that sometimes we wear a mask, sometimes we become the mask. In the years since, I have experienced all the normal life dramas and routines, accompanied by the occasional crisis. Most days I am some variation of Ivan -- a mostly likable, reasonably intelligent, socially awkward fellow. Then some days I rediscover myself seated in immense bliss beyond all simple self-definition.

I left my cave. We left Maui and returned to the U.S. mainland. I think of that as when I returned to the world. Or maybe it was my first time entering the world, since I'd spent my whole life up until then running from it. I brought with me my love of poetry, my love of the human journey, and a few drops of bliss to sprinkle about me when no one is looking.

This is what I think of when reading lines like—

When I sit in the heart of His world
A million suns blaze with light...

Listen to the unstruck bells and drums!

Rains pour down without water...

To revel in such vast ecstasy...

The Lord is in Me