The Rav
of Northern White Russia declined,
in his youth, to learn the
language of birds, because
the extraneous did not interest him; nevertheless
when he grew old it was found
he understood them anyway, having
listened well, and as it is said, 'prayed
with the bench and the floor.' He used
what was at hand -- as did
Angel Jones of Mold, whose meditations
were sewn into coats and britches.
Well, I would like to make,
thinking some line still taut between me and them,
poems direct as what the birds said,
hard as a floor, sound as a bench,
mysterious as the silence when the tailor
would pause with his needle in the air. 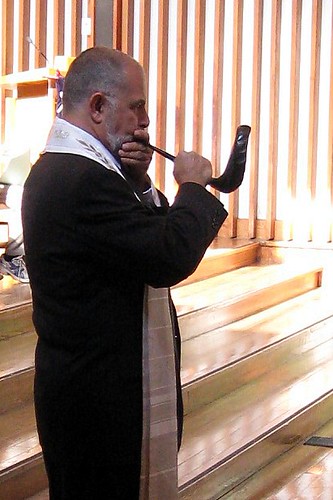 View All Poems by Denise Levertov

Today is the beginning of Rosh Hashanah, the Jewish New Year. It's no coincidence that it occurs near the cardinal point of the autumn equinox. When the year starts with the darkening months of autumn and winter, the year is born from the inside out. The year begins with an inward focus that nurtures and shapes the outer activities of spring and summer.

My closest friend is Jewish. We've been friends since the age of seven. Growing up, I spent much of my free time at his house. I often joined his family for holiday meals and occasionally for a Saturday visit to the synagogue.

In my own home, I was raised by a single mother who was a lapsed Catholic. Through my mother, I picked up a strong sense of morality and spiritual purpose, but only a sketchy idea of what religious life meant to most people. That's part of why I had both a fascination with and, occasionally, rebellion against my friend's religious and cultural life.

His family was modern and generally secular. I got the feeling that his parents' religious observance was more about cultural identity than religious belief. But there were moments, such as when I'd join them on Rosh Hashanah, with his family gathered around the dining table, where each food had a significance -- apples dipped in honey to bring sweetness in the new year -- that I would feel the spark of belonging, not just to a family, but to a heritage.

I was such a solitary child who didn't like rules or prescribed behavior. There were times when I was not the best influence on my friend, encouraging him to ditch Torah school so he and I could attend to the mischief of childhood... not that he needed a lot of encouragement. ;-) It was my mother, who had rejected formalized religion, who helped me to recognize the importance of his religious heritage. She reminded me of the grainy black and white photographs in my friend's living room, photographs of cousins, aunts, and uncles lost to the Holocaust, how the continuing enactment of tradition can be an important way to reaffirm the continuity of one's identity, of family, of the realization of the dreams of past generations.

My friend now has children of his own. As someone without children myself, there is something deeply moving to me to watch how that mischievous boy is now grown up and sharing his rich heritage with his own children. The turning of the year. The turning of the generations.

We all need to find our own unique way to draw a taut line between ourselves and those who've gone before us to show us the way...