Becoming sky & earth
Wind & light
Becoming flesh & spirit
All that truly is
& all that which is not
Becoming the Lord,
He makes those who say,
"I" & "mine"
Dance in the show
Becoming sky
& standing there...
How can my words
praise Him?


| More Poems by Manikkavacakar | Next Poem >> 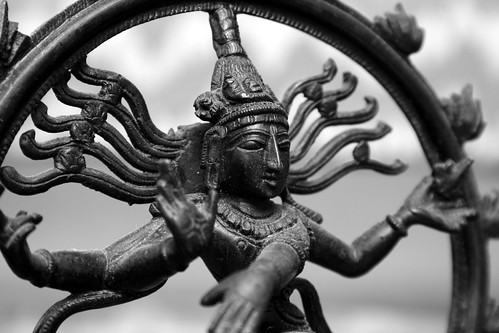 
View All Poems by Manikkavacakar

Today is the Hindu festival of Shivaratri in honor of the the god Shiva. Often Shiva is depicted as a meditating, long-haired ascetic, but another important expression of Shiva is as Nataraj, Lord of the Dance.

Shiva Nataraj is depicted with one foot raised in dance, the other foot treading upon a figure representing ignorance. In one hand he holds the drum that is the fundamental sound of creation. In another he displays the fire of destruction. A third hand expresses the mudra (hand position) of fearlessness, while the fourth hand points to his upraised foot, suggesting the path to liberation. His jata, matted locks, fly out about his head; in the wildness of his dance, they crash into the objects of existence, dispelling their illusory being. And flames emanate from his dancing body, representing manifestation, creation radiated out into being by the pure energy of his dance.

Shiva's dance -- called the Tandava -- is the rhythm of the universe, the dance of creation, evolution, destruction, and renewal. The cycle of the seasons is in his dance, All patterns and rhythms emanate from Lord Shiva's dance, from the ages of the world to the thrum of each person's heartbeat.

All the dramas of existence are expressions of Shiva's dance.


First, Manikkavacakar describes his expansive, blissful merging with all Being--

Everything merging with the Eternal...

From the egoless, all-permeating state, the yogin witnesses Lord Shiva's dance play out. He sees people, creatures, all beings swept up in the rhythm of that great dance. From the yogin's elevated state, the Tandava is an immense, colorful wonder of swirling movement, contact and conflict, birth and death, joy and suffering, rising and falling.

But to those swept up in the dance, the rhythms are overwhelming, the experiences can be terrifying. As beautiful as the great cosmic dance is, the individuals within it are engaged in exhaustive struggle, often disoriented, and sometimes touched by terrible suffering.

Why the disconnect between the macrocosmic majesty and the microcosmic misery?

Amidst the dance of being, people struggle because of the ego sense. They say "I" and "me" and "mine." This creates an incomplete and fixed sense of self -- very dangerous in a world defined by movement. The ego is a sort of spiritual temper tantrum, a child's hot assertion that "this is what I am, and this is all that I am, and the world had better stay put!" But the dance continues. The universe is alive, and life moves.

The dance of existence is terrifying when we identify with all the tumbling bits and pieces. But when we come to know ourselves as flowing, spacious, subtle beings of pure dynamic awareness, we can then choose to participate or not, in service and in delight. We are no longer IN the dance, we have become the dance. We are not so much bodies or collections of experiences with a fixed point in the rhythm, we are the flow of rhythm itself. Free from the fixations and limitations of the little self, we now move with Shiva himself.

How can words manage to praise the Lord of the Dance?