Out in a downpour


Out in a downpour
in a sopping wet
skirt.
And you have gone to a distant country.
Unbearable heart,
letter after letter
just asking when,
my lord, when
are you coming? 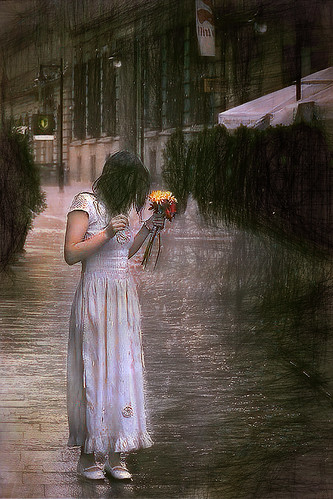 
View All Poems by Mirabai

I don't know what it is about this imagery, but this poem has stuck with me ever since I first read it. A woman standing out in a downpour and not caring, consumed by a great and terrible love -- it is like a scene from a classic film. Visceral, intimate, yet epic.

(This picture I found doesn't do justice to the image in my mind. I see something in black-and-white. A lovely young Indian woman, the camera looking down upon her, as she lifts her face and opens her arms to the downpour. And the open-mouthed expression I see on her face, is it one of pain? Or the beginning of laughter? Or a feral combination of the two...?)

We are witnessing a moment in a great love story. But this is Mirabai, and her beloved is God.

Often we like our saints and sages to be born in stable, perfect enlightenment, a simple picture with no struggle or drama, never having sensed separation. But that pain of separation, desperately looking for the lost love, is essential for the flowering of full self-awareness and true union.

And you have gone to a distant country.

You can see that so much of our life force is spent in avoidance, avoidance of confrontation with that gulf between the individual and the Eternal.

Most people look away, spend all their life running from that canyon of separation. But the mystic sits on the cliff edge and, though frightened, stares endlessly into the great space… until suddenly an amazing thing happens -- in a flash the emptiness is seen to be not a distance but a connection, a joining. The gulf is itself the bridge spanning the distance, and we discover that we can walk upon it, that there was, in fact, never any separation or distance.

It is the very intensity of our yearning that is finally recognized as the point of connection with the Eternal. And then the pain flips, turning to such sweetness.

Next time it rains, don't run for cover. Step out in the downpour, feel what it's like to be drenched!

Out in a downpour