What is Left to Say

It stops trying to please
by learning everyone's dialect;
it finds it can live, after all,
in a world of strangers.

How splendidly arrogant it was
when it believed the gold-filled tomb
of language awaited its raids!
Now it frequents the junkyards
knowing all words are secondhand.

It has not chosen its poverty,
this new frugality.
It did not want to fall out of love
with itself. Young,
it celebrated itself
and richly sang itself,
seeing only itself
in the mirror of the world.

It cannot return. It assumes
its place in the universe of stars
that do not see it. Even the dead
no longer need it to be at peace.
Its function is to applaud. 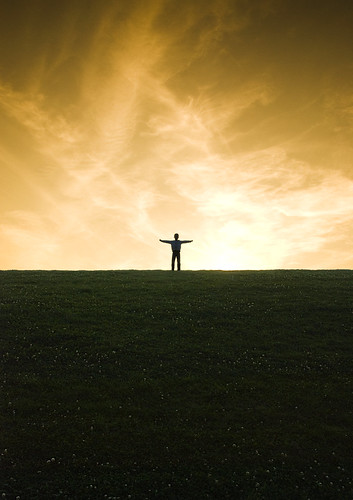 View All Poems by Lisel Mueller

I have read several of Lisel Mueller's poems in the past, and liked them very much, but I haven't particularly sought them out. Earlier this week a friend in Australia sent me this poem, however, and I now realize I have been missing out.

There is so much gentle wisdom in this poem, how we think of our self.

Language gives us so many opportunities to trip ourselves up. This is especially true when speaking of grand but intangible concepts. We can speak of the self and mean the Self, the eternal presence we all are at the core of our being, or we can say the self and mean the mask, the social identity, the ego. It is this smaller, constructed self that the poet explores here.

We adopt roles in life, or they are given to us -- child, spouse, parent, with a certain career, a social status, a circle of friends, a set of interests -- we gather up that collection of roles, and we say to ourselves and the world, "This is me. This is who I am. This is my self."

We try so hard to be those things. But it never quite works.

It is not necessarily that those roles don't suit us. The real problem is that, no matter how fulfilling or well-suited those roles may be for us, we are not our roles. Each role we enact is a form of expression, a story we tell within the larger social story. But, as I have said elsewhere, no story can contain us.

At some point wisdom guides us to stop identifying with those stories, whether or not we continue to live through them. We cease to be farmer, wife, or child. Instead, we are as we are. Then, from that unlimited sense of who we really are, we may choose to engage in make-believe, playing at being farmer, wife, or child.

It stops trying to please
by learning everyone's dialect;
it finds it can live, after all,
in a world of strangers.

So much of the self facade we create is an attempt to fit in, to see acceptance in the eyes of those around us. Even when we are in conflict, that clash is itself a taut sort of partnership.

To really emerge from the confines of this artificial self, we need to curtail the reflex to please and be understood by others. As we allow ourselves to be ourselves, we become mysterious, undefined, fluid.

Some can only see that surface self and so become strangers. Others may not know exactly what is happening with you, but they feel the change, the deeper currents in who you are, allowing a deeper part of themselves to respond and adjust to you.

This confection we have created of how we want to present ourselves to the world, it's no longer the constant focus of our infatuation. And the dramas and hurts we've cherished and defined ourselves by, they are simply part of the story, and not the most interest part.

Young,
it celebrated itself
and richly sang itself,
seeing only itself
in the mirror of the world.

This really gets to the heart of how this limited sense of self becomes a hindrance to spiritual unfolding. Even when the self we have constructed is positive and compassionate and noble, even then the little self eclipses our vision and we do not see reality directly as it is. It is as if we live inside an egg-shaped bubble, and all we see, wherever we go, with whomever we interact, is our own face reflected back to ourselves. Every relationship is really us interacting with some part of ourselves. Every action and accomplishment is us in worshipful communion with that reflection.

But at some point we just grow tired and stop projecting that constructed face up against the mirror of the world that surrounds us. We grow quiet and stop telling stories in our heads about who we are. And we just look. We see for the first time.

What do we see then? We witness a splendid tapestry of being laid out across the stars. A strange shift in perspective occurs: On the one hand, that little self we primped and pushed over a lifetime seems insignificant and lifeless; yet, on the other hand, we feel a new sense of self, wide open, at home among the stars.

Its function is to applaud.

Have a beautiful weekend!

What is Left to Say