Ek Onkar
One God,
One Song,
One Creation--

The true name,
creator of the universe,
beyond fear and conflict,
omnipresent,
unborn, undying, self-existent,
grace of the guru.

Chant this again and again!
From the beginning, truth,
throughout the ages, truth,
in this moment, now, truth!
Says Nanak, ever true! 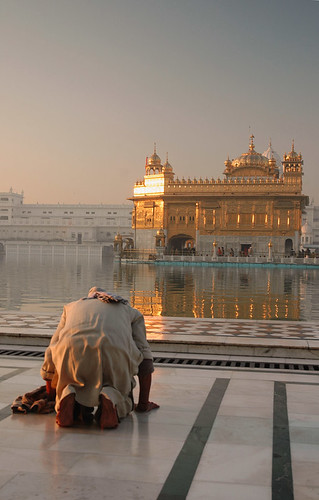 
View All Poems by Guru Nanak

This poem is referred to in the Sikh faith as the Mul Mantar, the root mantra, said to be the first words spoken by Guru Nanak upon his enlightenment, making this statement of encompassing unity the core statement of Sikh belief.

Onkar (Omkar in Sanskrit) is the fundamental sound “OM” that permeates all as the vibration that manifests existence. Onkar is the voice of God, the sound of God. Its sound is the “true name” of God.

In such a visually-oriented world, it can be surprising to have God identified with sound. When we are silent and the attention is turned inward, a soft sound is heard within. At first it might sound like the quiet chirping of crickets in the night, the hum of bee-song on a summer day, or the flowing of a gentle stream. It is heard as a random, soothing white noise that emanates from the base of the skull.

When we learn to recognize this sound and focus on it, the tone resolves into a clear pitch resembling the pure note of a flute or the ringing of a bell. First, it is heard and, later, felt throughout the body.

To Sikhs, this is the true name. To Hindus, it is Krishna's flute calling his devotees to himself. To Christian mystics, it is the ringing of the bells of paradise. Wordless, it is the vibratory Word through which creation manifests.

This sound signals the beginning of deep communion with the Eternal. The more we open to the sound, the more the attention is drawn inward and heavenward as the divine breath that carries this Song flows through us.

Returning, then, to these initiating lines, Ek means One, and Onkar, as mentioned, is the sound of God's presence in manifestation. So we can read "Ek Onkar" as "God is One," or "God's Name is One," or "God's Song is One," or even "God's Creation is One." Since all of existence is the manifestation of this universal vibration, all of creation similarly is One in God.

"Ek Onkar" is an assertion of supreme inclusivity and sacred unity. God is One, and we are One in God.

From the beginning, truth,
throughout the ages, truth,
in this moment, now, truth!

These lines can cause confusion if we read them superficially.

Fundamentalists of various religions have a tendency to misunderstand statements like this and assert that religion alone is the truth and must remain unchanged. Too often that attitude leads to cultural and intellectual fossilization. Religion is confused with God, the practice with the Goal. This happens especially when the esoteric heart of religion is lost.

When the wise assert that truth does not change they are speaking of something deeper. Guru Nanak is proclaiming that truth is eternal, not just in the past, not just in some distant future, but just as much right here, right now. Truth is "unborn, undying, / self-existent." It is a living, accessible truth, not a perpetuation of belief or form of worship.

Only through direct experience of truth do we discover the full meaning of our religious traditions. Otherwise, we are simply acting as museum curators.

Cultures change -- always. We must be perpetually engaged in that change, intelligently adapting the ancient ways, integrating them into the living present.

We need true, deep mystics to understand how to live our ancient faiths in the present moment. Better still, we must each become true, deep mystics ourselves. Then we will know and properly honor the truth that is from the beginning, throughout the ages, and in this moment.