Here I see no-one
to cast, on the petals of
this rose, this shadow. 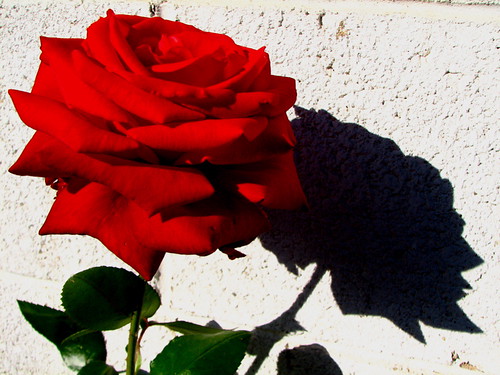 
View All Poems by Colin Oliver

Like most haiku, these lines use a simple image of nature that works literally and, at the same time, hints at a more transcendent meaning. The rose here can be read as a rose, but we might also see the rose as the awakened heart.

The poet says he sees "no-one to cast ... this shadow." Well, the shadow, of course, is cast by himself. But there is no one there. He is speaking from the nondualist perspective in which the Self is recognized as being everywhere, but the individual self, the little self that dwells within the body is found to be imaginary, a phantom, unreal.

The rose, in other words, can be recognized as the seat of the true, undivided Self. There may be the appearance of a separated identity that seems to cast a shadow upon it -- yet, on further investigation, nothing is there to cast the shadow. The rose is all. The shadow is merely an illusion.

A few other random notes...

That beginning word -- "Here" -- is so strong that it stops us before we've taken our first step and roots us in the present moment.

Let me also say, from a purely esthetic point-of-view, I love how the language is constructed so we end up with that pairing in the last line:

this rose, this shadow