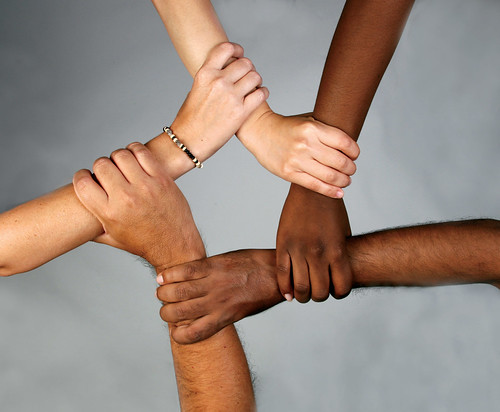 Looking at me, most Americans would call me white, but less and less does that mean something to me. Ethnically, I'm a typical American mutt, with ancestry from numerous countries, not all of them European. I have always had a diverse group of friends, from different ethnic, religious, and cultural backgrounds.

My closest friend in early childhood was a Nigerian boy, the son of students who had moved to the United States to attend the local university. Though I certainly don't claim to understand race from his perspective, our friendship alerted me to questions of race and racism early on.

More recently, my friendship with a Pawnee man has led to several fascinating conversations on race and identity. He said something that startled me: There is no such thing as race. There is culture, there is appearance, but there is no race. My initial reaction was that it's a nice idea to espouse as a countermeasure to the ongoing problems of racism, but race itself is a simple fact, isn't it? It took a bit of deeper thought on my part before the truth of what he was saying struck me -- the actual, biological truth of the statement, not simply the ethical rightness behind it.

Let's take a few minutes together to go beyond the question of racism and see if we can dismantle the underlying presumption of race itself...

A white person may be someone with fair skin and blue eyes and we may be accurate in saying that he has some ancestry that goes back to northern Europe, but it is false to say he is a member of the white race, as distinct from other races.

The fact is that there is no central characteristic of a white race or black race or any race. How can that be, you ask? We could mention several details like hair or eyes, but the most obvious distinction is skin color.

But think about skin color for a moment. That northern European may have very pale skin, but if we travel south through Europe to the Mediterranean, the common skin tone is much darker. Are they still "white"? Are we still talking about the same "race"? (The 19th century was uncertain on this point, by the way.)

Let's go further south, down the boot of Italy, through Sicily, and hop the Mediterranean to northern Africa. The average skin tone has gotten darker still, but it hasn't changed as much as some might imagine. In many ways Mediterranean Europeans have more in common with their Mediterranean African neighbors than with their fellow Europeans further north. By crossing the Mediterranean, have we switched races yet? How much change in skin tone constitutes a change in race? What is the definitive border? Can we mark it on the color wheel?

We can keep going south, across the Sahara into central Africa. Depending on which group we look at, we can get skin tones ranging from golden caramel to skin color so dark that it takes on an almost bluish or silver tint in the sunlight. Are all of those African peoples of the same "black" race?

Although we keep asking the same questions, the answer keeps eluding us. Where is the clear dividing point between the races?

There is no such racial borderline. The only time that border exists is when we don't look for it. In truth, there is no race, only a spectrum of human appearance. The idea of distinct groups of people that we divide into races is an artificial cultural notion built on assumption and poor observation.

A question to take with you into the day: If we are not a world of black people and white people and every other race, but simply people of varied appearance, what does that mean in our day-to-day lives? What does that mean here in America where we use race to define identity and separate ourselves from our fellow Americans?