Today I'm out wandering, turning my skull
into a cup for others to drink wine from.
In this town somewhere there sits a calm, intelligent man,
who doesn't know what he's about to do! 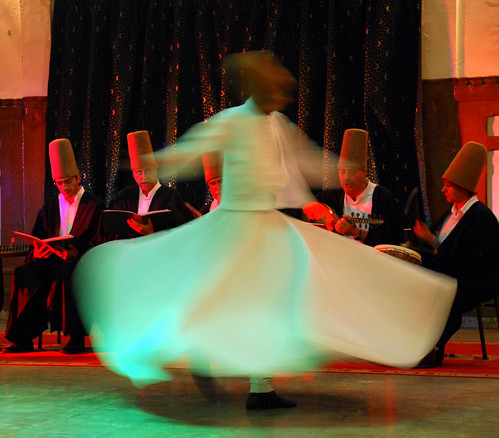 This is an interesting poem by Rumi. The image of turning his skull "into a cup for others to drink from," what do you think he means by this?

In sacred traditions, the skull is often described as a bowl or a cup that receives the "liquid" of bliss -- the Sufi's "wine" or the yogi's amrita.

It is in the skull that this "wine" is first recognized, where it is first received. The skull seemingly lights up, from its base at the back of the neck around to the point between the eyebrows, and the entire inverted "cup" of the skull seems to fill up with a substance of immense life and joy.

Rumi is receiving so generously of this divine drink that he is pouring it out for all to imbibe.

And that "calm, intelligent man" is about to consume the wine and, in turn, the wine will consume him -- completely. He is about to be drunk with the taste of the Beloved on his lips. Who knows what he'll do then! He might just spin with ecstasy.