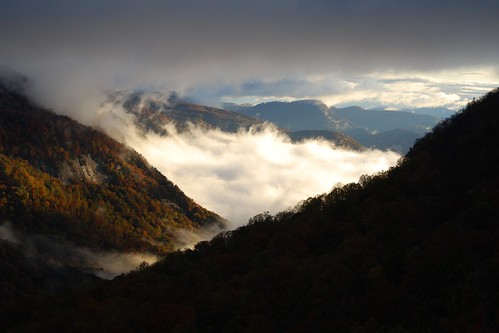 I can't say exactly why, but I've always felt an especial aliveness in autumn. Perhaps it is the clarity of the light on the coloring leaves. The crisp mornings and the way twilight lingers late over the land. That feeling of transition, change, teetering at the edge of winter's cold, between activity and inturning -- a secret threshold in the seasons when new pathways can be discovered.

It seems with every autumn my body takes on a ritual fever or influenza, and I have to admit that I find the state rather comforting. It feels strangely right when autumn comes, to feel a slight flush, to be slow of movement and thought, to view the new world through glowing eyes, not quite free from the dream state. Autumn is a season that invites visions, that gives us glimpses of the strangeness of the world we think so familiar, and in that strangeness we discover new possibilities, new ways of being, new ways of seeing. Things lose their familiar forms and names in autumn's half-light, and we ourselves can seem small and wraithlike amidst the shifting unknown. I've always seen in this season a window into the great Mystery, frightening and exhilarating, melancholy and delightful. Is anything substantial in this magical season? No, not really. Except, perhaps, for the life and light of awareness that burns so bright within us.

It's a good season to see a nameless mountain.

Have a beautiful autumn day.

Much love to everyone!