Watching the moon
at midnight,
solitary, mid-sky,
I knew myself completely,
no part left out. 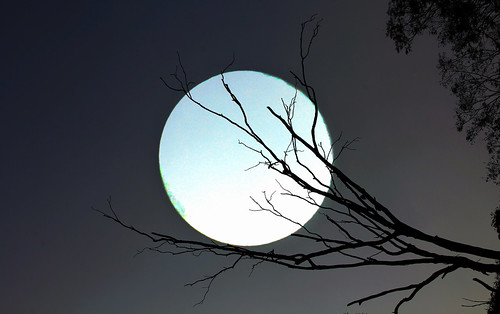 
View All Poems by Izumi Shikibu

We just had an equinox full moon. Did you see it? I watched the luminous orange moon rise through the bare branches of the trees and climb with maternal majesty into the night sky. The full moon, it seems to me, embodies something both earthly and otherworldly, both at the same time. When the world around us takes on a luminosity and reveals new realities interwoven within the neighborhood we walk daily, that's a good time to encounter ourselves for the first time....


Whenever the moon appears in a poem, we can read it as a reference to illuminated awareness -- whether intended or not by the poet -- and the meaning of the poem unwraps itself in fascinating ways...

The blissful state reveals itself as a shining light, as a luminescence permeating the still field of the mind. There is a sense of light from an undefined 'above,' silence, a fullness of vitality, and deep rest. In sacred poetry, particularly in Zen poetry, this is often expressed as the full moon in the night sky.

When the moon, consciousness, is full, it is round, whole, complete, perfectly reflecting the light of divine awareness. The full moon is enlightenment. It is Buddha-mind. It is the soft light that illumines the land below when all is at rest.

With this understanding, reread Shikibu's poem. Do you feel the power of the statement beneath its beautiful words?

When she says she is "Watching the moon," she can be describing the deep meditation practice of witnessing the radiance of opened awareness. To do so "at midnight" carries the double meaning of a late night meditation (which is often the best time for deep contemplation), but midnight also suggests the depth of the great Void. We perceive the enlightened mind shining quietly within a pregnant emptiness. There is only awareness. (I have read alternate translations of this poem that say "at dawn" rather than midnight, which carry their own meanings.)

The poet specifically describes the moon as "solitary" and "mid-sky." In this profound communion, the awareness is recognized as being absolutely alone in the sense that there is no 'other,' nothing outside of its sphere; it is "solitary." And it is the center point of being; it is the heart, it is the core; the moon is "mid-sky."

When we stand silently bathed by the light of the moonlight, we finally experience our true nature. We know ourselves "completely" -- all of the seemingly disjointed and conflicting parts of ourselves are seen to be parts of a unified whole, "no part left out." We are the wholeness.