Thirteen Ways of Looking at a Blackbird

I
Among twenty snowy mountains,
The only moving thing
Was the eye of the blackbird.

II
I was of three minds,
Like a tree
In which there are three blackbirds.

III
The blackbird whirled in the autumn winds.
It was a small part of the pantomime.

VI
Icicles filled the long window
With barbaric glass.
The shadow of the blackbird
Crossed it, to and fro.
The mood
Traced in the shadow
An indecipherable cause.

VII
O thin men of Haddam
Why do you imagine golden birds?
Do you not see how the blackbird
Walks around the feet
Of the women about you?

VIII
I know noble accents
And lucid, inescapable rhythms;
But I know, too,
That the blackbird is involved
In what I know.

IX
When the blackbird flew out of sight,
It marked the edge
Of one of many circles.

X
At the sight of blackbirds
Flying in a green light,
Even the bawds of euphony
Would cry out sharply.

XI
He rode over Connecticut
In a glass coach.
Once, a fear pierced him,
In that he mistook
The shadow of his equipage
For blackbirds.

XII
The river is moving.
The blackbird must be flying.

XIII
It was evening all afternoon.
It was snowing
And it was going to snow.
The blackbird sat
In the cedar-limbs. 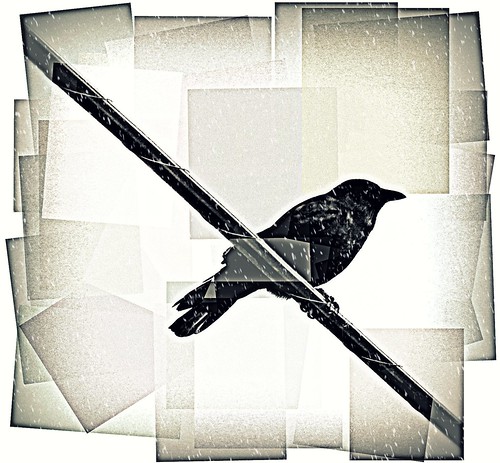 
View All Poems by Wallace Stevens

I once heard a story about Wallace Stevens: His work as an insurance salesman required him to spend a lot of time on the road. As his poetry gained recognition, he was offered academic positions to focus exclusively on his writing, but he refused to leave his job, saying that his poetry drew its rhythm from the steady flow of lines on the road as he drove.

I'd be hard-pressed to clearly define what I like about the poetry of Wallace Stevens, but I keep coming back to it with a smile. This poem, for example, his best known... it is just one of those perfect poems. Each little verse is practically a haiku. The words don't even entirely make sense, but they pull you into the still, present moment.

These blackbirds haunt the frigid quiet and accent the bare landscape with their coal dark presence. Their watchfulness and small movements impinge upon our awareness, suggesting something of the void or an intelligence from some hidden realm reaching into the human world and whispering, "you are not all there is." An intimation that is both hopeful and haunting -- feelings entirely right for a cold winter's day.

I read this poem on a snowy Colorado day, and the world goes quiet, dusk trickles in through bare branches, my misty breath lights up in the moonlight.

And, what is that? A blackbird? Or some watchful shadow of myself?