The Education of the Warrior

That mind of fearfulness
Should be put in the cradle of loving-kindness
And suckled with the profound and brilliant milk
Of eternal doubtlessness.
In the cool shade of fearlessness,
Fan it with the fan of joy and happiness.
When it grows older,
With various displays of phenomena,
Lead it to the self-existing playground.
When it grows older still,
In order to promote the primordial confidence,
Lead it to the archery range of the warriors.
When it grows older still,
To awaken primordial self-nature,
Let it see the society of men
Which possesses beauty and dignity.
Then the fearful mind
Can change into the warrior's mind,
And that eternally youthful confidence
Can expand into space without beginning or end.
At that point it sees the Great Eastern Sun. 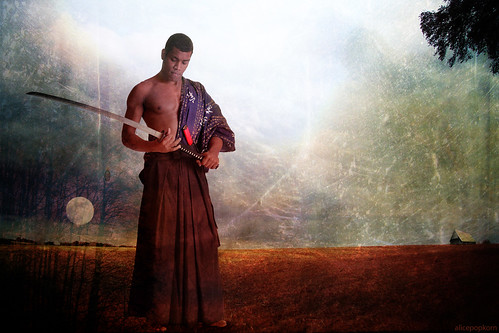 
View All Poems by Chogyam Trungpa

Chogyam Trungpa Rinpoche was a hugely influential, though controversial Buddhist teacher who carried the Kagyu and Nyingma lineages within Tibetan Buddhism to America. In addition to his many talks and books on meditation, philosophy, and awareness, he also wrote about the notion of the spiritual warrior, inspired by the legendary kingdom of Shambhala.

While I am not a follower of Trungpa Rinpoche (although I live in the American city he made his home), and though I am highly critical of some of his methods and aspects of his private life, I recognize how important he has been, and continues to be, in the spiritual opening of the west. One of his teachings that I find especially fascinating is his notion of the spiritual warrior.

I am fascinated as much by our reaction within the "spiritual" community to the idea of the warrior as with the core idea itself. We can find it inspiring and energizing, especially when it remains conceptual, but just as often we find it uncomfortable or threatening to the ideal of being peaceful individuals within a peaceful world. I think those are all truly legitimate responses.

That mind of fearfulness
Should be put in the cradle of loving-kindness...

The idea of warriorship is about confrontation, with fear, with death. It is a mindset of bold action. Now, that can be immensely powerful as we maneuver though the challenges of life, or it can become quite the opposite, a pathway to brutality, domination, and self-centered purpose. Amidst the intensity of the warrior's worldview, recognizing the difference is often difficult. That, I think, is the real measure of success in the warrior's path, the ability to see clearly, keep the heart open and compassionate, and measure one's true purpose while engulfed by the heat of struggle.

Nearly fifteen years ago, when I returned to the US mainland after several years living in semi-retreat on Maui, I made a conscious decision to become re-engaged with the world. Because of my extensive fasting and sparse diet, my body had grown extremely thin. I had cultivated an ethereal quality to my body and my entire energy. That may have been suited to a sadhu, but not to someone determined to participate in mainstream society. I decided to put on weight, literally and metaphorically. I changed my diet and began to eat more. I began to lift weights and, over the space of a year, put on nearly 50 pounds. And I started training in the martial arts. Ultimately, the form of martial art I settled on was -- swordfighting. (I know. I'm weird.)

To most people this evolution is surprising, bizarre even. How does facing someone down with a Medieval longsword or Renaissance rapier fit in with the spiritual life, or poetry for that matter? To this day I consider myself to be essentially a pacifist, perhaps not absolutely, but in general orientation. How do I reconcile that with the violence inherent in the sword?

As someone who had spent the first three decades of his life trying to float away, I saw that I needed a practice that kept me rooted in my body. I also knew I needed to develop a hardier mindset to deal with the chronic health issues that were becoming more prominent at that time. And I had to acknowledge that I have a certain aggressive energy that I would be wise to befriend and express in healthier ways.

So why not a more "spiritual" martial art, like Tai Chi or Aikido? Part of it was that I wanted to be out of my comfort zone. I wanted to be a novice, uncertain, vulnerable, not the comfortable and confident "spiritual Ivan" in one more spiritual circle, however physically demanding. After experimenting with other martial arts, something just lit up in me at the touch of a sword. The sword is at the same time a thing of beauty and an object of fear. I felt I should explore that giddy attraction/repulsion.

Having lived so much in my mind and my ideals, I am, on a basic level, offended by the fact that just the slightest shift of leverage or position can mean the difference between lying dead on the ground or going on to live for another 40 years. Such a minute, physical difference just shouldn't affect the journey of something so immense as the human soul, yet it does. And that, I suppose, is what fascinates me, that spiritual conundrum-- how skill in something so specific and physical can hugely impact the unfolding experience of our being. Then the question becomes how do we face this dilemma, and how do we integrate it into our larger sense of self?

This is the difficult internal balancing act of the spiritual warrior. And everyone, regardless of lifestyle or philosophy is, in some sense, a spiritual warrior. The complex, often conflicting forces of physical, social, and spiritual life require a warrior's approach to navigate effectively. Every action, internal or external, is a movement in harmony with some forces and in opposition to others. And, as much as we in spiritual culture love our moral and ethical purity, daily life for an adult constantly leads us into gray areas and imperfect decisions. Learning to navigate this unavoidable complexity without losing contact with our true ideals is precisely what we need and what the warrior's path teaches us.

In other words, we all need to be warriors in some respects. We always need to remind ourselves that pacifism is not the same as passivism. I remember reading an interview years ago with another teacher on spiritual warriorship who made a critical comment about modern pacifism. The interviewer blurted out, "But what about Gandhi?" His response was, "Gandhi, what a fighter!"

I think that's the point. And the point of Chogyam Trungpa's poem, too. True warriorship isn't inherently about violence, it is about facing one's fears, possibly facing death itself, with a sense of courage, full awareness, while embodying the highest possible purpose.

Now, I am a historian, as well. I am fully aware of the terrible carnage and suffering created generation after generation by wars, fueled in part by naive, overly-romantic notions of the heroic warrior. I am not suggesting any superficial right or wrong perspective. I will say, however, that the solution to the war reflex within society is not to banish or suppress the warrior instinct. The warrior is an essential archetype within the human psyche. It is there, whether we are comfortable with it or not. What is necessary, as individuals and as a society, is to learn how to channel that intense, vigorous energy toward positive, non-destructive purposes -- protecting people and endeavors that need protecting, while always questioning those who claim to speak with authority just as we must question ourselves and our own actions.

The greatest vulnerability of the warrior mindset is falling into an ends-justify-the-means approach. As the spiritual warrior Gandhi pointed out, there are never truly any ends, only an ongoing chain of means that define the world we live in. But this potential weakness is also closely linked to the greatest strength of the warrior, which is to fully embrace the power of those means, through total dedication to the skill and action needed in any given moment as a method to embody the best possible world, within and without.

Then the fearful mind
Can change into the warrior's mind,
And that eternally youthful confidence
Can expand into space without beginning or end.
At that point it sees the Great Eastern Sun.