I am nobody:
A red sinking autumn sun
Took my name away 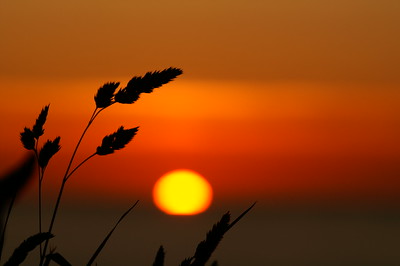 
View All Poems by Richard Wright

The great African-American writer, Richard Wright, is best known for his novels Native Son and Black Boy, but less well-known is that late in his life, while living in self-exile in Paris, he wrote thousands of haiku.

This is one I keep re-reading since I first discovered it as I was editing Gabriel Rosenstock's Haiku Enlightenment.

This haiku resonates on so many levels.

We start with negation. The author is not there. We ourselves as readers are not there. I imagine an outline where a person might have stood, a shadow, a silhouette. Awareness is there, but no self.

Then we have the massive glowing presence of the red sinking sun. We go from negation to immensity. The vastness of that vision has a gravitational pull to it. It has grabbed us and carried us away. It...

Took my name away

And that's what it is, this state of being nobody. The witness -- the author, the reader -- is still there on some essential level, but the "name" has disappeared. That self-referential loop within the mind has stopped its ceaseless spinning and we have become a thing undefined. In that quiet, selfless state, we stand in open mystery with great beauty open before us.

I write all this, obviously not during the autumn, but looking out the window at a blanket of snow glistening in bright morning sunlight. Of course, anything can be that autumn sun for us, a mountain, a symphony, a thought. It's not so much a matter of putting ourselves in the presence of the right thing, so much as being present ourselves, open, and ready to be swept away into silence.

...I have been reminded by a reader that it is important to remember that Richard Wright, as a black man who lived his later years in France in rejection of institutionalized American racism may also be making a comment about the experience of African Americans in the US down to literally having their names taken from them. I really appreciate that reminder about perspective. A good poem can be read in multiple ways at the same time.