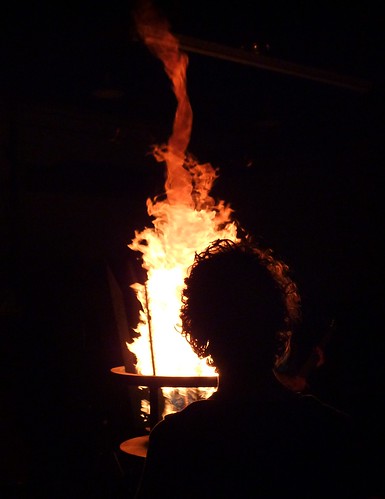 
View All Poems by Yannai

a fire that is, and never expires...

Isn't this chant-like selection wonderful? It brings us all into the sacred reality described in the Torah when Moses witnesses the burning bush -- the fire that burns the tree without consuming it.

Fire is, of course, an important theme in the poetry of sacred experience. In deep communion, mystics often experience a sense of heat -- filled with immense love -- that permeates the body. As this fire moves through the body, it also moves through the awareness, consuming all thoughts (or, more accurately, the tremors from which thoughts emerge). This fire burns away even the thought of "I" -- only the sense of this living flame remains. You could say it burns away what is non-essential, but yet you in your essence remain. Even more than remaining, your sense of self has radically opened up into something too spacious and vast to describe. When we witness this fire, we know we have come upon holy ground; we must remove our 'sandals' -- the outer protection of the ego which prevents us from being in direct contact with the ground of being.

a fire, curled, like the colours of the rainbow!