Whence, whence this soundless roar doth come,
When drowseth matter's dreary drum?
On shores of bliss, Om, booming, breaks!
All earth, all heaven, all body shakes!
Cords bound to flesh are broken all,
Vibrations burst, meteors fall!
The hustling heart, the boasting breath,
No more shall cause the yogi's death;
All nature lies in darkness soft,
Dimness of starlight seen aloft;
Subconscious dreams have gone to bed...
'Tis then that one doth hear Om's tread;
The bumble-bee now hums along --
Hark! Baby Om doth sing His song!
From Krishna's flute the call is sweet:
'Tis time the Watery God to meet!
Now, the God of Fire is singing!
Om! Om! Om! His harp is ringing.
God of Prana now is sounding --
Wondrous, breathing-bells resounding!
O! Upward climb the living tree;
Hark to the cosmic symphony.
From Om, the soundless roar! From Om
The call for light o'er dark to roam.
From Om the music of the spheres!
From Om the mist of nature's tears!
All things of earth and heaven declare,
Om! Om! Resounding everywhere! 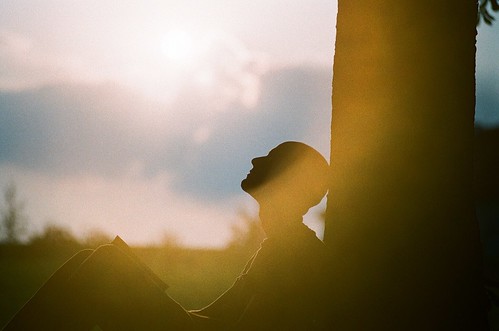 
View All Poems by Paramahansa Yogananda

A meditation today on Omkara, the primal sound of being, by the great early 20th century ambassador of yogic philosophy, Paramahansa Yogananda.

When the attention is turned inward a soft sound is heard. At first it might be like the quiet chirping of crickets in the night, the hum of beesong ("The bumble-bee now hums along --"), or the flowing of a gentle stream. It is heard as a random, soothing "white noise" that seems to emanate from the base of the skull.

'Tis then that one doth hear Om's tread

When focused upon with a still mind and deep attention, this sound resolves into a clearer pitch that can resemble the pure note of a flute or the ringing of a bell. First it is heard and, finally, felt throughout the body.

This sound is Krishna's flute calling his devotees to him ("From Krishna's flute the call is sweet"). It is the ringing of the bells of paradise ("Wondrous, breathing-bells resounding"). Wordless, it is the vibratory Word through which creation manifests.

This sound signals the beginning of deep meditation. The more we open to the sound, the more the attention is drawn heavenward while the divine flow pours through us.

Yogananda makes some other important yogic references in this poem worth our contemplation:

The hustling heart, the boasting breath,
No more shall cause the yogi's death

In some forms of yogic practice, part of the goal is to settle the energies of the body so profoundly that breath and heartbeat themselves are suspended, allowing the subtler energies to flow unimpeded. The energetic demands and rhythms of the body no longer disrupt the deepest communion and, thus, no longer "cause the yogi's death," which is separation from the Eternal. (It should be obvious, however, that attempting such practices can be dangerous without knowledgeable guidance.)

Most meditation practices encourage the restful centering of the eyes beneath closed lids, focusing either upward toward the center of the brow (common in most yogic practices), or downward to the tip of the nose (some Buddhist practices). Either focal point causes the attention to settle at the point between the eyebrows -- the ajna chakra or "third eye." When this energetic center becomes spiritually activated, and the meditator is in deep quiet, a glowing point or ball of light is witnessed internally. This is the initiate's star, the "Star of the East" that leads us to enlightenment. As the meditator focuses on this point of light, the subtle energies awaken and begin to rise upward, toward the light, toward enlightenment...

Yogananda is referring here to the shushumna, the central energetic pathway that runs up the spine. It is often described as a tree. A primary goal of yoga is to awaken the spiritual energies and awareness commonly trapped at the base of the spine until they rise up the shushumna "tree" to the crown, initiating enlightenment.

So let's remember to pause, to grow quiet, and to listen for that sweet, secret sound...