Vanished the veils of light and shade,
Lifted every vapor of sorrow,
Sailed away all dawns of fleeting joy,
Gone the dim sensory mirage.
Love, hate, health, disease, life, death,
Perished these false shadows on the screen of duality.
Waves of laughter, scyllas of sarcasm, melancholic whirlpools,
Melting in the vast sea of bliss.
The storm of maya stilled
By magic wand of intuition deep.
The universe, forgotten dream, subconsciously lurks,
Ready to invade my newly wakened memory divine.
I live without the cosmic shadow,
But it is not, bereft of me;
As the sea exists without the waves,
But they breathe not without the sea.
Dreams, wakings, states of deep turiya sleep,
Present, past, future, no more for me,
But ever-present, all-flowing I, I, everywhere.
Planets, stars, stardust, earth,
Volcanic bursts of doomsday cataclysms,
Creation's molding furnace,
Glaciers of silent x-rays, burning electron floods,
Thoughts of all men, past, present, to come,
Every blade of grass, myself, mankind,
Each particle of universal dust,
Anger, greed, good, bad, salvation, lust,
I swallowed, transmuted all
Into a vast ocean of blood of my own one Being!
Smoldering joy, oft-puffed by meditation
Blinding my tearful eyes,
Burst into immortal flames of bliss,
Consumed my tears, my frame, my all.
Thou art I, I am Thou,
Knowing, Knower, Known, as One!
Tranquilled, unbroken thrill, eternally living, ever new peace!
Enjoyable beyond imagination of expectancy, samadhi bliss!
Not a mental chloroform
Or unconscious state without willful return,
Samadhi but extends my conscious realm
Beyond the limits of the mortal frame
To farthest boundary of eternity
Where I, the Cosmic Sea,
Watch the little ego floating in me.
The sparrow, each grain of sand, fall not without my sight.
All space like an iceberg floats within my mental sea.
Colossal Container, I, of all things made.
By deeper, longer, thirsty, guru-given meditation
Comes this celestial samadhi
Mobile murmurs of atoms are heard,
The dark earth, mountains, vales, lo! molten liquid!
Flowing seas change into vapors of nebulae!
Aum blows upon the vapors, opening wondrously their veils,
Oceans stand revealed, shining electrons,
Till, at last sound of the cosmic drum,
Vanish the grosser lights into eternal rays
Of all-pervading bliss.
From joy I came, for joy I live, in sacred joy I melt.
Ocean of mind, I drink all creation's waves.
Four veils of solid, liquid, vapor, light,
Lift aright.
Myself, in everything, enters the Great Myself.
Gone forever, fitful, flickering shadows of mortal memory.
Spotless is my mental sky, below, ahead, and high above.
Eternity and I, one united ray.
A tiny bubble of laughter, I
Am become the Sea of Mirth Itself. 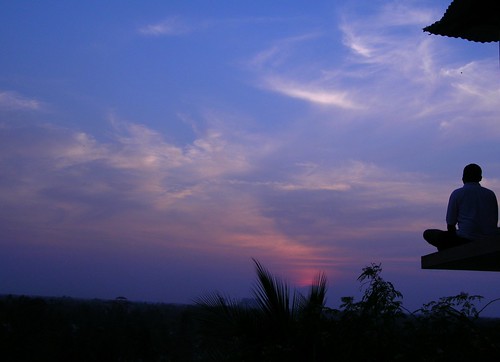 
View All Poems by Paramahansa Yogananda

Yesterday was Mahashivaratri for Hindus, "the great night of Shiva," a time to celebrate the marriage of Lord Shiva and Parvati, the balanced union of Male and Female within the universe. This is a time of year considered auspicious to elevate and focus one's spiritual practice. It is fitting then that, for Christians, today is Ash Wednesday, the beginning of the season of Lent, the time of prayer, penance, and purification in preparation for Easter.

I thought this poem on the rarified state of samadhi by Paramahansa Yogananda might be a good choice for today...


Something of my journey from childhood through adolescence: My early fascination with comic book superheroes was transformed in 1977 into an obsession with all things Star Wars. Jedi, lightsabers, the Force, Yoda. There was a unifying thread in these stories of mystic warriors, heroic figures with supernatural abilities standing up to protect the vulnerable. These heroes, by the very nature of their unique abilities and view of reality, were necessarily outsiders.

To a painfully shy young boy, these were powerful archetypes that leapt and fought and strutted through my youthful fantasies.

With the 80s and early adolescence came Dungeons & Dragons. (I know, I was a nerd.) I could imagine in ever more detail that I was a knight or a wizard. I quickly noticed something... as cool as swords were, the role I really wanted to play over and over again was the wizard. I mean, knights were just muscular guys wielding stylized meat cleavers, but wizards, well, wizards had mastered and transcended the very nature of reality itself. Wizards were the real superheroes.

But D&D was ultimately frustrating. Those long afternoons spent with friends rolling dice and casting imaginary spells in made up worlds began to feel as if, on some deep level, I was giving up on reality. I didn't want to play at being a wizard; I wanted to be a wizard.

That's when, at age 13, I discovered the writings of Carlos Castaneda. These were wild, mind-blowing stories of sorcery and alternate realities in the Sonoran desert. For the next several years I carried a beat up Castaneda paperback with me everywhere I went, reading and rereading those bizarre adventures. I so wanted to break into that world where I imagined that wizardry might just be real.

Those stories awakened a fierce determination within me to seek living truths behind what most people assumed to be immutable reality. They gave me permission to be odd, that is, wholly myself, and to see the world through my own eyes.

But-- I finally came to the conclusion that those shadowy tales of desert sorcery were unbalancing. The philosophy was stark, at times cold-hearted. The universe of this semi-fictional reality was described in predatory terms, in which Indian sorcerers and astral beings preyed on one another while seeking greater power. To the uncritical glance of a 13 year old, that world was magical, dangerous, fascinating; but to a 17 year old stumbling his way into adulthood, it became a dead end.

It was at this time, in my late teens, when I first read Yogananda's Autobiography of a Yogi. With it's adventure, philosophy, descriptions of mystical states, respect for the universality of all religions... and its compassionate outlook, that book reopened my spiritual horizon. It restored my breath to me when so much seemed stripped of purpose. It gave me the courage to hold a gentle heart, and begin to imagine a viable and inclusive path of spirit.

Yogananda's Autobiography was also my first introduction to the yogic term 'samadhi' -- the mystic's total blissful absorption in the Divine.

Myself, in everything, enters the Great Myself.

'Samadhi' is one of Paramahansa Yogananda's most loved poems describing the ecstatic, elevated spiritual state. There is so much to say here, but I think I'll step back and let Yogananda's words ring in the silence.

Present, past, future, no more for me,
But ever-present, all-flowing I, I, everywhere.

A poem is built of rhythm and words upon a foundation of breath. And breath guides the awareness. A poem like this can lead the reader into lands of sacred experience...

Spotless is my mental sky, below, ahead, and high above.
Eternity and I, one united ray.

Those moments of pure insight, the recognition of one's true being as it expands and melts into the vastness of Being, and discovering how that realization can be poured out into the mind of the world, that's real wizardry. Striving for that truth, discovering it, sharing it with a desperately thirsty world, that's real heroism.