When my Beloved appears

When my Beloved appears,
With what eye do I see Him?

With His eye, not with mine,
For none sees Him except Himself. 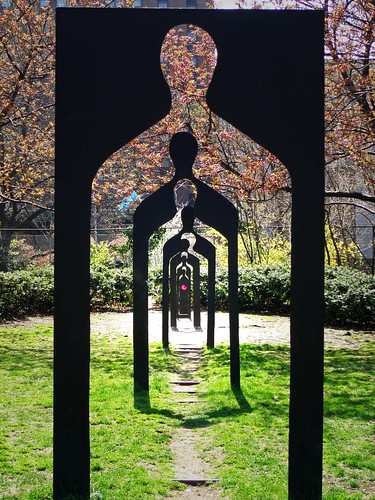 What does ibn Arabi mean when he says that he sees God, the Beloved, not with his own eyes but with God's eye? These lines sound like ibn Arabi is playing a poetic word game, but he is actually expressing a deep truth: God is not perceived directly with the physical senses, not even by the subtle senses. One does not see the Beloved; the Beloved is simply seen.

Sight, the senses, even the subtle senses of inner visions compartmentalize awareness. They break perception down into manageable pieces that the mundane consciousness can process and understand. But to truly see God, to be fully and consciously in the presence of the Beloved, we must look not with the physical eyes or the limited mind but with the whole awareness that flows through us.

The selfish sense of self, the ego, keeps the conscious mind busy slicing up reality into small fragments, for only in that scattered reality can the ego pretend it is in control of anything. The holistic reality is too immense and too complete for the petty tyrant of the ego-self to maintain its illusion of dominion.

So the first task is -- with supreme patience and balance and subtlety -- to unseat the ego in order to open the possibility of genuine, unhampered perception of the Divine.

The resulting unbroken, unsegregated awareness is "His eye." It is the holistic awareness that does not begin and end but simply permeates yourself and all things. It is not 'your' eye because that awareness doesn't feed back into or reaffirm the egoistic self. Instead, it is "His eye," the eye of the Eternal Beloved that sees all as a living unity. It is only through this eternal awareness that we become aware of the Eternal, "For none sees Him except Himself."

Another way of trying to put this into words is to say that you and I don't see God in the normal sense; instead God shares awareness of Himself through us. When we lovingly purify our awareness and remove the shadow of the ego, we become like a clear mirror through which the Beloved sees His own reflection. As individual sparks of consciousness, we don't do the seeing so much as participate in it.