Studying texts and stiff meditation can make you lose your Original Mind.
A solitary tune by a fisherman, though, can be an invaluable treasure.
Dusk rain on the river, the moon peeking in and out of the clouds;
Elegant beyond words, he chants his songs night after night. 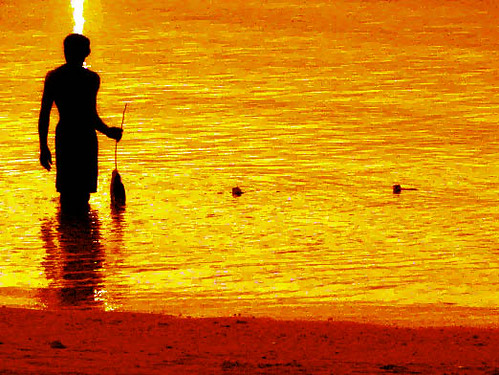 The deeply committed spiritual path can so often become all consuming -- scholarship, meditation and other practices -- that we either become attached to the path, or engrossed in our own efforts, and in the midst of it all we forget our true goal... what is sometimes called in the Zen tradition, Original Mind.

In true Zen style, Ikkyu cuts through all impediments, even those within his own spiritual tradition, in order to bring us back to the realization that our goal is immediate, right here, and utterly simple. It is not hidden behind arcane texts. It is not attained through uninspired, dogged effort.

When we have readied ourselves, it is simply there. Sometimes all we need is the simplest reminder of fundamental truth -- a solitary fisherman singing his timeless chant on the river at night.