O Kali, my Mother full of Bliss!
Enchantress of the almighty Shiva!
In Thy delirious joy Thou dancest,
clapping Thy hands together!
Eternal One! Thou great First Cause,
clothed in the form of the Void!
Thou wearest the moon upon Thy brow.
Where didst Thou find Thy garland of heads
before the universe was made?
Thou art the Mover of all that move,
and we are but Thy helpless toys;
We move alone as Thou movest us
and speak as through us Thou speakest.
But worthless Kamalakanta says,
fondly berating Thee:
Confoundress! With Thy flashing sword
Thoughtlessly Thou hast put to death
my virtue and my sin alike! 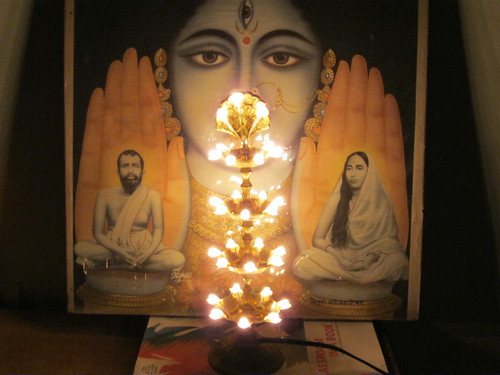 
View All Poems by Kamalakanta

I thought I'd select this poem for us today...


To appreciate this poem we need to know a few things about the traditional Hindu representations of the Goddess.

In Hindu tradition and metaphysics, the Goddess represents many aspects of the Divine. The iconography we find in Hinduism gives us a fascinating kaleidoscope of meaning. The Goddess can represent Mother, the Great Source, the Void/Womb from which all are born, Manifestation, Creation, Vibration, Speech, Song, the Arts, Beauty, Darkness, Mystery, all of the World (and all its Illusions). But with birth, also comes death, with manifestation, also comes dissolution; anything with a beginning also has an end. Only the eternal is eternal. So the Goddess, Mother and Manifestor, is also sometimes portrayed as Destroyer. She is Life and Death both. She is the Power that brings all into being, animates and enlivens the universe, and also draws it back into non-being. But even in Her fiercest aspect, the Mother Goddess is loving. For Her, death is merely the death of illusion and the return to Self.

Many Westerners at first find the iconography associated with the goddess Kali unsettling and can't understand why so many beloved saints, like the gentle Ramakrishna, were so deeply devoted to her. Let's spend a few moments contemplating this powerful representation of the Divine Feminine...

Kali is sometimes called the Dark Mother: beautiful, wild, and terrible. She is depicted dancing in ecstasy upon a battle field, slaying demons in her fierce bliss.

Her skin is black and she is naked, symbolic of the Eternal Void with which she clothes herself.

Thou wearest the moon upon Thy brow.

She wears the moon upon her brow (as does her husband, Shiva), symbolizing the open spiritual eye and spiritual illumination. The crescent moon has the additional metaphorical meaning of mastery over the feminine, cyclical aspect of manifest nature, the way it ebbs and flows, grows full and then diminishes.

Where didst Thou find Thy garland of heads
before the universe was made?

Kali wears a garland of severed heads, a startling image, but one of deep spiritual significance. These are the heads of slain demons, each a spiritual impediment that she has removed. Well, she hasn't really removed them; in slaying the demons, she has freed them, so that now their heads rest in bliss upon her breast.

Further, each head, severed at the neck, represents a specific sound; collectively, the heads represent the sound of divine speech, the foundational vibration or Eternal Word, through which the universe is manifested.

Confoundress! With Thy flashing sword
Thoughtlessly Thou hast put to death
my virtue and my sin alike!

We often get teasing lines like this in sacred poetry. In the deep spaces of bliss, when the ego identity has disappeared and thought has ceased, the tensions we associated with doing "good" or "bad" also disappear. This does not mean that one cannot distinguish between right and wrong, quite the opposite; one sees clearly for the first time. But there is no projection of "should" or "shouldn't." Instead, there is a profound sense of what simply is, and what is potential. The feeling of being caught in a tug-of-war between opposites and social compulsions vanishes. To the thinking mind, the mind chained to the ego, this is indeed confounding.

Kali can express a terrifying face of the Divine, but there is a reverse side to this. She may inspire terror, yes, but only in that which is out of harmony with the Eternal Will; seeing the Goddess, such energies know their end has come. If we ourselves cling to such disharmonious qualities, then we too may fear her. But when we let go of such clinging, approaching this great, formless Goddess with humility and courage, then terror is transformed into awe and overwhelming bliss.

You can say that this Dark Mother loves all her children so fiercely that she refuses to let any of us remain chained to comfortable but lethal delusions. Every soul needs such a loving, liberating mother, even when we don't always appreciate her...


It's a crisp autumn morning here. The snow from the last few days never quite stuck, the air is clear. The aspen leaves dance in green and gold, glistening in the light. Remember the beauty all around you!