Intense cold makes water ice.
Then the hard ice turns to slush
and back to water, so there are three
forms of consciousness: the individual,
the world, and God, which in the sun
of True Awareness melt to one flowing:

In meditation, I entered the love furnace,
burned impurities away, and as the sun
of a new knowing rose, I realized
that the words "Lalla" and "God"
point to this peacefulness. 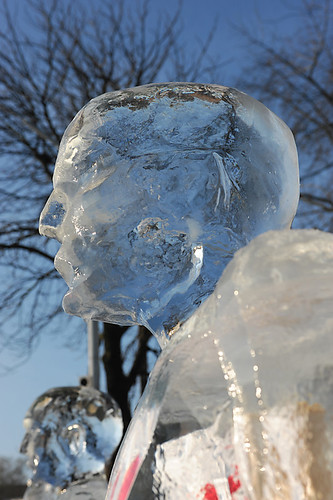 
View All Poems by Lalla

I spent most of my growing up years in Los Angeles -- endless city, and no winters. I remember the one time as a child when the temperature dropped down to 30 degrees, and I implored the weather gods for snow. But it was not to be. It was Southern California, after all. A little more bundled than usual, I still had to go to school.

So when I moved to Colorado as an adult, you can imagine my sense of wonder at the snow each winter. In fact, I lived in places up in the mountains where the snow would build up until it literally covered part of the ground floor windows. One more reminder for me that, no matter how much we humans construct our own environments, we are still residents within the world of nature, and that natural world is immense, stunningly beautiful, and ignored at our own peril...

Intense cold makes water ice.
Then the hard ice turns to slush
and back to water...

Lalla is giving us a simple spiritual metaphor, but although the intellect can quickly comprehend what she is saying, it's important not to rush past it. Sit with the metaphor for a bit, let the imagery and meaning ferment quietly in your mind.

Water becomes solid ice when it is cold enough. It becomes almost rock-like: impenetrable, graspable, tangible... an unavoidable 'thing.' With a little bit of warmth, it starts to melt and becomes a slushy mixture of states, in some ways still seemingly solid, yet a hand can pass through it. When it has fully yielded to the warmth, it is liquid again, fluid, ungraspable, less a 'thing' and more of a filling of space.

Even so, all are the same substance: water. There has been no essential change other than the form perceived by the witness; it is a continuum that only appears different.

...so there are three
forms of consciousness: the individual,
the world, and God, which in the sun
of True Awareness melt to one flowing

And Lalla is reminding us that the individual and God are the same, separate only in apparent form, but in essence it is all one continuum of consciousness. The individual, the world, and God, when seen clearly in the warming sunlight of True Awareness are seen to "melt to one flowing."

Her insight: In that instant of true seeing, we cease to identify ourselves as the individual or ego, and instead recognize ourselves as "that" -- the flowing that moves through the entire spectrum of existence.

I realized
that the words "Lalla" and "God"
point to this peacefulness.

Reread those last lines, but insert your own name for Lalla's.