When psalms surprise me with their music
And antiphons turn to rum
The Spirit sings: the bottom drops out of my soul.

And from the center of my cellar, Love, louder than thunder
Opens a heaven of naked air.

New eyes awaken.
I send Love's name into the world with wings
And songs grow up around me like a jungle.
Choirs of all creatures sing the tunes
Your Spirit played in Eden.
Zebras and antelopes and birds of paradise
Shine on the face of the abyss
And I am drunk with the great wilderness
Of the sixth day in Genesis.

But sound is never half so fair
As when that music turns to air
And the universe dies of excellence.

Sun, moon and stars
Fall from their heavenly towers.
Joys walk no longer down the blue world's shore.

Though fires loiter, lights still fly on the air of the gulf,
All fear another wind, another thunder:
Then one more voice
Snuffs all their flares in one gust.

While God sings by himself in acres of night
And walls fall down, that guarded Paradise. 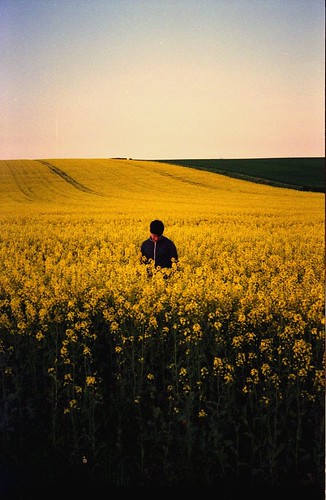 
View All Poems by Thomas Merton

When psalms surprise me with their music
And antiphons turn to rum
The Spirit sings: the bottom drops out of my soul.

How about that for an opening? I love that phrase: "the bottom drops out of my soul."

The first two-thirds of this poem are an ecstatic meditation on the mystic's experience of union. A flooding of love and joy. A sense of profound clarity. An awareness of universal harmony amidst the kaleidoscopic multiplicity. An inner music. A giddy feeling of drunkenness.

But the tone of Merton's poem shifts near the end.

There is a deflation in his final few stanzas. The riotous sense of life is replaced by emptiness.

I can't quite decide if he is suggesting the return to mundane awareness, or its opposite -- moving beyond to a state of utter stillness, where all of creation opens into a cavernous spaciousness, where no 'thing' remains, no boundary exists, only scintillating awareness in the substratum of existence.

While God sings by himself in acres of night
And walls fall down, that guarded Paradise.

Sometimes the question is more interesting than the answer. So let's let that question mark hover in the air.