If something has an essence--
How can it ever change
Into anything else?

If something changed into something else--
Milk would be butter
Or butter would not be milk. 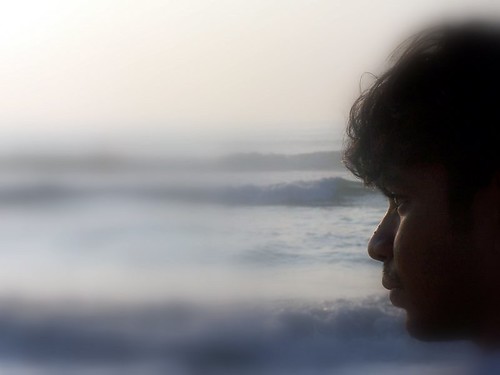 
View All Poems by Nagarjuna

It seems like a little while since we last looked at a Buddhist poem, so something today by Nagarjuna...

Several challenging statements here about essence and change, but I particularly want to focus on the final stanza:

Clearly, sunyata or "emptiness" is what Nagarjuna wants us to come to terms with. Why then does he throw it back in our faces with the statement that "Believers in emptiness / Are incurable"?

One must meet reality without a mental overlay of projection and assumption. "Belief" is the intense clinging to an assumption of what something means. Belief, in other words, is a sort of mental insistence that things are a certain way and fit into a certain framework -- all without truly knowing. That approach can help in the early stages of seeking, but it becomes a major stumbling block further along the journey. Belief becomes a barrier to knowing.

Belief always has something of the believer mixed in it. Belief is a swirling mix of what others have taught and our own limitations of mind, experience, and ego. To know truth, we must remove ourselves from our perception of what actually is.

Belief may initially point us in a good direction, but that's when the work starts: We must actually make the journey. And all along the way, we must constantly test what we notice and test ourselves against those initial beliefs. Untested belief becomes brittle, and ever more opaque.

Yet so many refuse to loosen their grip on belief in order make the actual journey and test their beliefs against direct perception. It's easier -- and, for the ego, safer -- to believe, rather than to know. This is why those who "believe" in emptiness (or Nirvana or Heaven or God) are "incurable."

It's a troubling teaching given by masters and mystics everywhere: Always better to know than to believe.