Once for all, this time

Once for all, this time,
I have thoroughly understood;
From One who knows it well,
I have learnt the secret of bhava.
A man has come to me from a country
where there is no night,
And now I cannot distinguish
day from night any longer;
Rituals and devotions have all grown profitless for me.

My sleep is broken;
how can I slumber any more?
For now I am wide awake
in the sleeplessness of yoga.
O Divine Mother,
made one with Thee in yoga-sleep at last,
My slumber I have lulled asleep for evermore.

I bow my head, says Prasad,
before desire and liberation;
Knowing the secret that Kali
is one with the highest Brahman,
I have discarded, once for all,
both righteousness and sin. 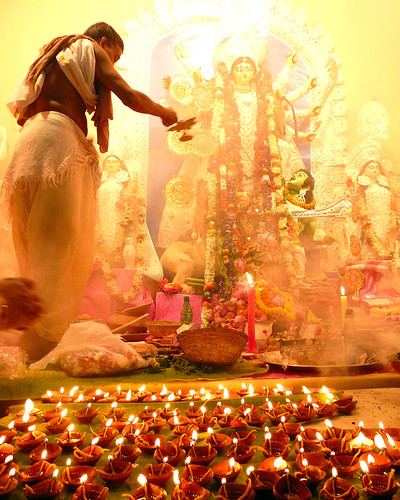 I really like this poem of enlightenment. I am especially fascinated with how Ramprasad plays with themes of night and sleep in this song.

His teacher comes "from a country / where there is no night." And then he himself "cannot distinguish / day from night any longer."

Many mystics perceive a living, all pervading light. This light is immediately understood to be the true source of all things. This light is everywhere, always, even at night. When you fully settle into the awareness of this light, it can overwhelm your senses, making it difficult -- and pointless -- to distinguish between night and day, or even between objects. Everything is filled with and surrounded by this light, everything IS this light. Why then would you wrench yourself out of this awareness merely to superimpose artificial distinctions?

Ramprasad goes on to speak of the "sleeplessness of yoga." This is a phrase that appears often in yogic writings. It holds meaning on a few levels. When the Kundalini Shakti -- the divine flow of energy associated with the Goddess -- is roused and flows generously, the energy can be so strong that the body feels continuously charged up and needs little or no sleep. Many mystics go through periods of not sleeping as a result, sometimes for very extended lengths of time. This is a more surface understanding of the statement.

On a more subtle level, this wakefulness is the recognition that the individual awareness is finally "wide awake." The metaphor of being spiritually awake is used a lot but not always with deep reflection. The actual experience of sudden opening is very much like waking up for the first time. It's as if you've been walking around in a dream state all your life and just not known it. Nothing around you has changed, but you finally, truly see things as they are. The dream-like barrier of mental filters that has stifled your perception for so long falls away like a heavy blanket. You blink, look around yourself, and are surprised to realize you've been looking without seeing. This is the deeper "sleeplessness" that allows Ramprasad to assert that he has finally put sleep itself to sleep: "My slumber I have lulled asleep for evermore."

But then he playfully turns this metaphor on its head and talks of union with the Divine Mother in "yoga-sleep." This too works on at least two levels: In the highest states of divine union, a master will enter into nirvikalpu samadhi, a state of utter physical and mental stillness in which even the breath and heartbeat slow to a near stop. This is "yoga-sleep" or yoga-death. But, more generally, "yoga-sleep" is the stopping of the ego, the loss of the selfish self as it melts into the Universal Self of the Divine Mother. So Ramprasad is teasing us by contrasting the wakefulness of the Self with the sleep of the ego.

The final verse is a powerful but shocking recognition, that both "desire and liberation" are worthy of reverence. Not only have they each played a role in his awakening, but in fact they are, at the deepest level, mental distinctions that don't really exist. Ramprasad witnesses the nondual truth that the Divine is everywhere present, not merely in the things the mind labels as good or pure or holy. Don't get me wrong, the distinction is very important for most steps along the way; but there is a certain point where everything melts into one, where all of manifestation reveals the "secret" that all "is one with the highest Brahman [the Absolute]." Witnessing this, what room remains for "righteousness and sin?"

A closing note: Ramprasad's final statement naturally invites the question, Why make distinctions of morality at all? If the Divine is equally present in all creation and all actions, what difference does it make how we live our lives? It is not really a question of morality; it is a question of spiritual practicality. It's a question of what works. Focusing our energies on what we identify as good or pure or holy strengthens, quiets, and opens us, leading us quickly to our goal. Other choices lead to our own suffering, the suffering of others, and enmeshment with the ego. For the mystic, it is not about winning a philosophical or moral debate, but discovering the truest way to direct knowing.

So many imbalances in the world are resolved when we remember to honor the Sacred Feminine in God, in nature, in our relationships, and in ourselves. Blessings!

Once for all, this