I put my fingers in my ears
to block the sound
whenever Krishna gently plays His flute!

Declares Raskhan,
"It happens when enchanter Mohan
climbs to the rooftop
to call His cows.

"I issue a warning to all the people of Braja.
Tomorrow, I will not be able to console them. 
View All Poems by Rasakhan

Today is Krishna Jayanti or Krishna Janmashtami in the Hindu calendar, the day celebrating the birth of Krishna. Naturally, I thought we should select a poem in honor of Krishna...

Krishna is often depicted standing in a relaxed posture holding a flute to his lips. Think of Krishna as the pied piper of India, but it is lost souls he calls to himself.

I put my fingers in my ears
to block the sound
whenever Krishna gently plays His flute!

When you think about it, this opening line can be read in two different ways. On the surface, Rasakhan (speaking as Radha, the cowherd girl who loves Krishna) seems to be petulantly blocking out the music of Krishna's flute, not wanting to come when called. Of course, even this implies that the Lord's music is so enchanting that the only way not to be drawn by it is to try to block it out. This hints that we are already hooked by the call of God, that union is inevitable, and we can only temporarily put it off.

But there is another, esoteric way to read this, as well. The flute of Krishna is the quiet tone heard deep within the base of the skull when we sit in silent, devoted meditation and prayer. It is this whisper in the inner ear that draws us to deepest union with the Eternal. Understood this way, Rasakhan could actually be describing a yogic technique of blocking out sound and quieting the external senses in order to better hear Krishna's call within.

Declares Raskhan,
"It happens when enchanter Mohan
climbs to the rooftop
to call His cows.

We hear the flute when Mohan, another name for Krishna, climbs to the rooftop. In the language of yoga, this "rooftop" can be understood as a reference to the skull in general or, more specifically, the crown chakra.

I love those lines! That's the passion felt by a true lover of God! "I cannot... I cannot... I will not control my love."

The reason there was no poem email last week was that I was focused on fixing some technical issues with the Poetry Chaikhana website. It turned out to be a more challenging undertaking than I first imagined, but everything should be running smoothly once again.

In honor of the 150th anniversary of Gandhi's birth, the wonderful poet Gabriel Rosenstock has joined with the Kashmiri artist Masood Hussain to produce a beautiful series of posters depicting the Mahatma with an accompanying haiku. You can support the artist, who is currently cut off from the outside world because of the current tensions in Kashmir, by purchasing one of these posters.

let them in
weary women, men and children...
into our hearts
~ Gabriel Rosenstock 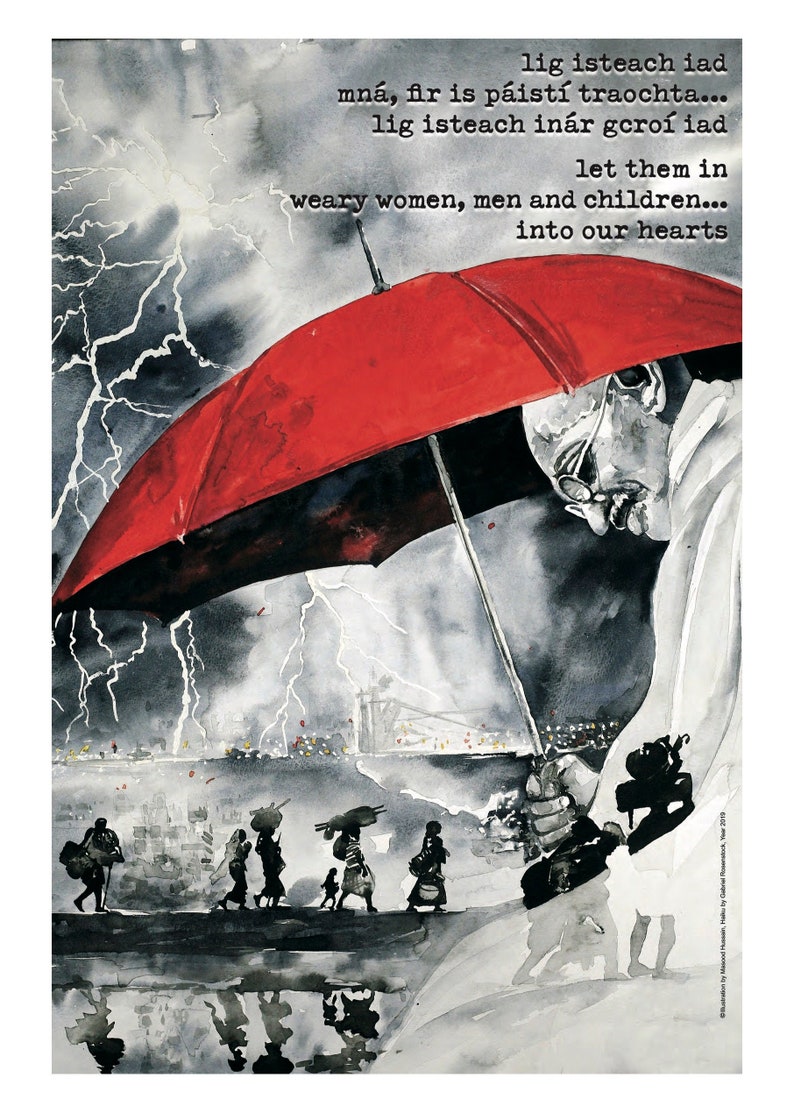