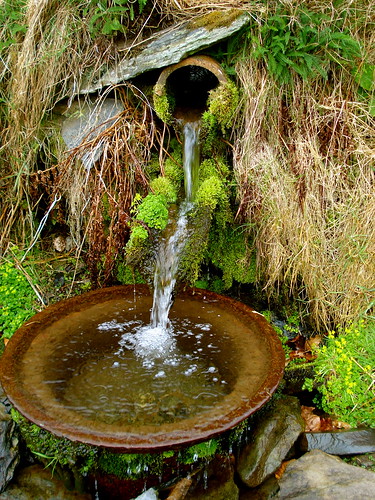 
View All Poems by Muso Soseki

I won't try to offer much commentary here, just a little set up. Muso Soseki has confronted us a good koan-like image to work with. Best to sit with riddle until the mind gives up... that's when the answer comes.

The water here is pure mind, Buddha mind. It is by its nature empty -- or, perhaps a better way to say that, is that it is spacious, all-permeating. No 'thingness' obstructs it... it can't be "muddied" no matter what apparently passes through it.

The Sixth Patriarch is Hui-neng (Eno in Japanese), usually considered the last patriarch of early Chinese Ch'an (Zen) Buddhism. His insights and teachings were particularly powerful in the development of Zen practice in Japan.

So we have the water. And we are seeking the Sixth Patriarch's fountain or source of the water. But Muso Soseki teasingly tells us we won't find it "on the one bank or the other / or in the middle of the stream." Where then is the source found?

(As I was contemplating this poem, it started raining heavily outside... water everywhere...)