Through that pure Virgin-shrine,
That sacred veil drawn o'er thy glorious noon
That men might look and live as glow-worms shine,
And face the moon:
Wise Nicodemus saw such light
As made him know his God by night.

Most blest believer he!
Who in that land of darkness and blind eyes
Thy long expected healing wings could see,
When thou didst rise,
And what can never more be done,
Did at mid-night speak with the Sun!

O who will tell me, where
He found thee at that dead and silent hour!
What hallowed solitary ground did bear
So rare a flower,
Within whose sacred leaves did lie
The fullness of the Deity.

No mercy-seat of gold,
No dead and dusty Cherub, nor carved stone,
But his own living works did my Lord hold
And lodge alone;
Where trees and herbs did watch and peep
And wonder, while the Jews did sleep.

Dear night! this world's defeat;
The stop to busy fools; care's check and curb;
The day of Spirits; my soul's calm retreat
Which none disturb!
Christ's progress, and his prayer time;
The hours to which high Heaven doth chime.

God's silent, searching flight:
When my Lord's head is filled with dew, and all
His locks are wet with the clear drops of night;
His still, soft call;
His knocking time; the soul's dumb watch,
When Spirits their fair kindred catch.

Were all my loud, evil days
Calm and unhaunted as is thy dark Tent,
Whose peace but by some Angel's wing or voice
Is seldom rent;
Then I in Heaven all the long year
Would keep, and never wander here.

But living where the sun
Doth all things wake, and where all mix and tire
Themselves and others, I consent and run
To every mire,
And by this world's ill-guiding light,
Err more than I can do by night.

There is in God (some say)
A deep, but dazzling darkness; as men here
Say it is late and dusky, because they
See not all clear;
O for that night! where I in him
Might live invisible and dim. 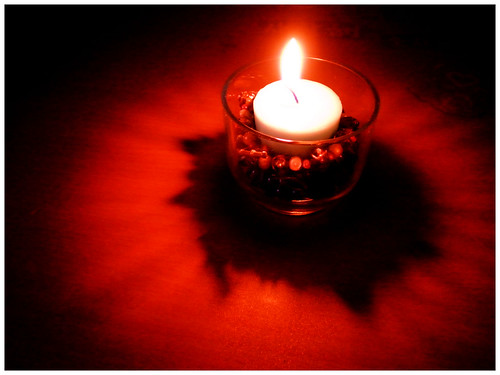 
View All Poems by Henry Vaughan

Let me first point out that this is a poem to be read out loud. Actually, all poems, except maybe some of the most contemporary poems and translations, are intended to be read aloud. Always remember, poetry is not about quietly reading in a book. Poetry requires us to make some noise!

If you just look at these lines on the page (or the computer screen), your eyes will tend to skim through the lines and not really take them in. This is a poem with rhyme and meter -- and life! -- but all that is easy to miss, unless you read it aloud. So go ahead, turn some heads, read out loud, feel this poem on your tongue. Several of the lines are worth savoring... tasty poetry!


Henry Vaughan starts off by recalling the Christian gospel story of Nicodemus visiting Christ in secret at night. He plays with the English pun of Christ as both Sun and Son. Thus, Nicodemus accomplishes a most amazing feat when he "Did at mid-night speak with the Sun!"

More broadly, this poem is a meditation on night as the initiator of light. It is when the worldly sphere is in darkness, when its endless activity comes to rest ("the stop to busy fools") that the mind settles and we have the opportunity to turn inward. It is in the womb of night that we stop our constant distractions and the light of spiritual awakening can be perceived.

But there is an even deeper meaning here, one that is more consciously mystical.

There is in God (some say)
A deep, but dazzling darkness...

The closing reference to the "dazzling darkness" is directly quoting a famous phrase from the hugely influential Christian mystical writings of Dionysius (who probably lived around 500 AD). Dionysius wrote that the "unchangeable mysteries of heavenly Truth lie hidden in the dazzling darkness of the secret Silence, outshining all brilliance with the intensity of their darkness."

This "dazzling darkness" is a reference to the state of awareness experienced in deep communion when the mind has settled completely into stillness and no longer projects a conceptual overlay upon reality. You can say that seeing (in the normal sense) stops, but perception finally opens. A person is no longer seen as a person, a table is no longer seen as a table. Surfaces and categories -- the foundation of mundane perception -- become ephemeral, dreamlike, insubstantial. You stop witnessing the surface level of reality in the common sense, and this can be compared to blindness or darkness. Instead, everything shines! Everything is radiant with a living sense of light. And the same light shines in everything.

This is the dazzling darkness. This is why many mystics assert they no longer even see the world and, instead, only see God. It is not that they start bumping into furniture when they walk across a room; perception on the mundane level doesn't stop (except in the most ecstatic states), but surfaces take on a thin or unreal quality; it only occupies a minimal level of the awareness. This is the way you can "at mid-night speak with the Sun!"