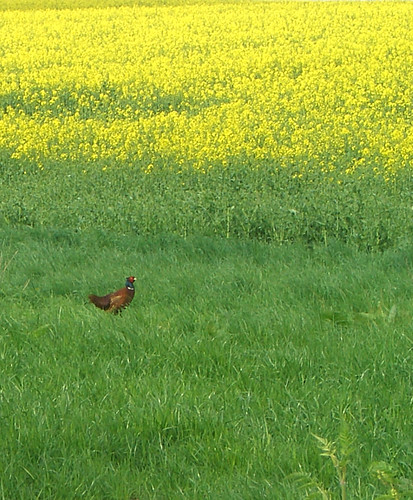 
View All Poems by Yamei

I'll say it now, this poem by Yamei is one of my favorite examples of haiku.

I lived for several years in Hawaii, on the island of Maui. It's a largely rural island, and I lived "upcountry" where you'll find lots of hilly fields and cow pastures. I'd drive my car through the winding country roads of Maui, and every once in a while I'd catch a glimpse out of the corner of my eye of a burst of color -- a pheasant startled from its hiding place. It's ascent was always full of effort, churning earthen wings pushing its sunburst bright head aloft. But then, landing a few yards away, its dignity restored, breast out, watchful eye upon the yellowing sea of grass, the pheasant left no doubt as to who ruled that quiet field. One shrill cry confirmed it.

This haiku reminds me of those island moments.

And something about the way Yamei describes the cry as "swallowing" the field. You can almost hear the sharp sound hanging over the field's dewy silence, defining the space. It is a wild cry, an assertion of self, an assertion of being and improbable lordship, Whitman's "barbaric yawp." It's as if the pheasant's cry casts out a net that draws in its whole world, making it his, making it a part of himself. That call creates union.

That pheasant's call, it wants to burst from your breast too. Let it loose. See what it draws into you.