Want the change. Be inspired by the flame
where everything shines as it disappears.
The artist, when sketching, loves nothing so much
as the curve of the body as it turns away.

What locks itself in sameness has congealed.
Is it safer to be gray and numb?
What turns hard becomes rigid
and is easily shattered.

Pour yourself out like a fountain.
Flow into the knowledge that what you are seeking
finishes often at the start, and, with ending, begins.

Every happiness is the child of a separation
it did not think it could survive. And Daphne, becoming
a laurel,
dares you to become the wind. 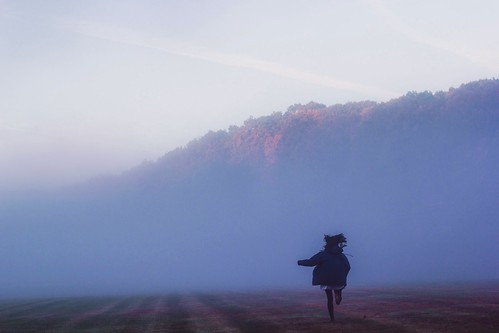 This poem is a lovely meditation on change and transitoriness -- as signs of life. It is only those relationships and experiences which move, and evolve, and eventually disappear that are fully alive.

Want the change. Be inspired by the flame
where everything shines as it disappears.

We so want the opposite to be true. We reflexively want to grasp the world, to hold it fixed, so we can trust reality, know its rules, and feel secure every day. But Rilke invites us to see with the poet's keen eye the truth of the matter: that which doesn't change lacks life and loses beauty--

What locks itself in sameness has congealed.
Is it safer to be gray and numb?
What turns hard becomes rigid
and is easily shattered.

I love the line--

This statement so powerfully evokes the courage each day requires and the generosity of self that we can bring to each encounter.

We give of ourselves not to secure our lives but to live our lives in fullness. And, in doing so, we discover more life in our lives.

Flow into the knowledge that what you are seeking
finishes often at the start, and, with ending, begins.

If you're not a mythology nerd, you may not have picked up on Rilke's reference to Daphne and the laurel...

And Daphne, becoming
a laurel,
dares you to become the wind.

In Greek mythology, Daphne was a stunningly beautiful nymph who lived and hunted in the woods. Because of her beauty men constantly sought her favors, but she refused everyone. Then the god Apollo fell in love with her, but she refused him as well. Daphne fled from Apollo, who continued to pursue her. When Apollo was about to grasp Daphne, she called upon her father's magical power, and she was instantly transformed into a laurel tree. The god Apollo, still in love with Daphne, but unable to embrace her, plucked a branch of the laurel and wore it as a wreath upon his head.

By evoking Daphne, Rilke is calling up this rich myth of beauty, and the inability to posses it. Yet that beauty, in transforming itself into something that can no longer be truly held or lusted after, takes on a new life all its own, a life that yet dances in the wind.

Rilke seems to be inviting us to encounter life with full presence and, with the courage of a witness rather than one who grasps, to appreciate beauty both in the coming and goings of life.