Published by Ivan M. Granger at 8:14 am under Poetry

Slowly the west reaches for clothes of new colours
which it passes to a row of ancient trees.
You look, and soon these two worlds both leave you,
one part climbs toward heaven, one sinks to earth,

leaving you, not really belonging to either,
not so helplessly dark as that house that is silent,
not so unswervingly given to the eternal as that thing
that turns to a star each night and climbs –-

leaving you (it is impossible to untangle the threads)
your own life, timid and standing high and growing,
so that, sometimes blocked in, sometimes reaching out,
one moment your life is a stone in you, and the next, a star. 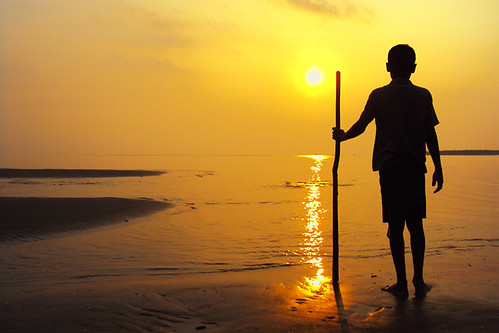 In the painterly beauty of a sunset, we see a transfer occurring, the passing of colors from sky to earth.

Slowly the west reaches for clothes of new colours
which it passes to a row of ancient trees.

We start to notice the “two worlds”: the brilliant but fading sky descending to the earth, while the earth’s horizon rises up into the night sky. Sky into earth, earth into sky, separating, yet also revolving into each other.

You look, and soon these two worlds both leave you,
one part climbs toward heaven, one sinks to earth,

The fixed world of the day is now on the move, dividing and departing. Which one shall we ride into the evening? Which is our home?

leaving you, not really belonging to either,

While, in some mysterious way, these separate worlds of shifting earth and sky are also reconnecting and recombining to form a magical new reality at night that may lead to an unimagined world tomorrow.

Who and what are we as its witnesses? Are we silent, like the somnolent earth, or are we celestial and immense, like the star-strewn night sky, which speaks even in its silence?

Which are we, timid, contained, withdrawn, or standing up, reaching out, growing? Like the earth and the sky at brilliant sunset, we are all of these at once, intermingled.

We embody both the earthly and the heavenly, and perhaps they are not in opposition to each other. These qualities contrast and strengthen each other, together creating a wholeness within the world and within each of us as individuals journeying along the horizon where earth and heaven meet.

We are neither stone nor star, but both.

one moment your life is a stone in you, and the next, a star.

Have a beautiful day, and a wondrous sunset!