Yunus Emre – One Who Is Real Is Humble

Published by Ivan M. Granger at 6:37 am under Poetry

One Who Is Real Is Humble
by Yunus Emre

To be real on this path you must be humble —
If you look down at others you’ll get pushed down the stairs.

If your heart goes around on high, you fly far from this path.
There’s no use hiding it —
What’s inside always leaks outside.

Even the one with the long white beard, the one who looks so wise —
If he breaks a single heart, why bother going to Mecca?
If he has no compassion, what’s the point?

My heart is the throne of the Beloved,
the Beloved the heart’s destiny:
Whoever breaks another’s heart will find no homecoming
in this world or any other.

The ones who know say very little
while the beasts are always speaking volumes;
One word is enough for one who knows.

If there is any meaning in the holy books, it is this:
Whatever is good for you, grant it to others too —

Whoever comes to this earth migrates back;
Whoever drinks the wine of love
understands what I say —

Yunus, don’t look down at the world in scorn —

Keep your eyes fixed on your Beloved’s face,
then you will not see the bridge
on Judgment Day.

— from Quarreling with God: Mystic Rebel Poems of the Dervishes of Turkey, Translated by Jennifer Ferraro / Translated by Latif Bolat 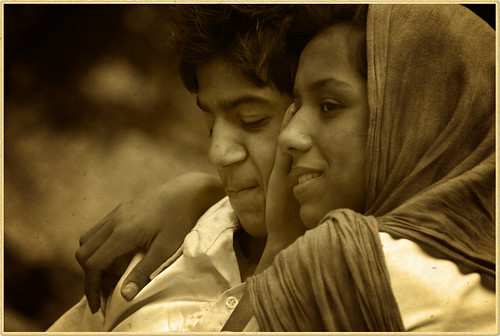 Yunus Emre gives us several wonderful lines in this poem…

There’s no use hiding it —
What’s inside always leaks outside.

That just about sums up the spiritual perspective of everything, doesn’t it? One way or another, the inner world always reveals itself. Whatever masks we wear eventually fall away or slowly take the shape of what lies beneath. Why hide what’s inside? We should cultivate and celebrate that inner self. It will show itself anyway.

This poem in general seems to be a critique of religious hypocrisy, and specifically it deflates the idea of religious superiority. Those first lines give us a strong image:

To be real on this path you must be humble —
If you look down at others you’ll get pushed down the stairs.

I imagine a stern imam (or bishop or preacher or rabbi) who has spent his life carefully studying the minutia of religious law and has come to see everyone as falling short. He casts a cold eye on flawed and worldly humanity and judges them all to be far beneath him. It’s as if he is looking down a long staircase at the world.

That figure is in far greater spiritual danger than most of the people he looks down upon. The thing he hasn’t recognized is how unstable those stairs are. Any distance of spiritual perfectionism we construct in our minds is inherently rigid and brittle, yet it must stand on a living, shifting ground. Those stairs will always collapse in the end.

The more people “look down on the world in scorn,” the further they fall. This is simple gravity.

Even the one with the long white beard, the one who looks so wise —
If he breaks a single heart, why bother going to Mecca?
If he has no compassion, what’s the point?

Yunus Emre gives us the essential keys: humility and compassion. Everything else leads to pretense, which disjoints the soul. False superiority enforces the illusion of separation and leads to collapse.

Yunus, don’t look down at the world in scorn —
Keep your eyes fixed on your Beloved’s face,
then you will not see the bridge
on Judgment Day.

We shouldn’t miss the logic of the first two lines: When we cast scornful eyes on the world, we can’t possibly see the Beloved’s face. The opposite is true, as well; when we are transfixed by the beauty of the Beloved, we see nothing but beauty. This is a clue… any religious figure who speaks with scorn, is not engulfed by the vision of the Divine and should be avoided.

The final couple of lines are also worth understanding. What does he mean about not seeing a bridge on Judgment Day? According Muslim tradition, in order to enter Paradise, one must cross as-Sirat, a bridge that is as thin as a hair and as sharp as a blade. But the purest never have to encounter the bridge. Yunus Emre is saying that it is only when we are not already lost in the vision of the Beloved that we must face the bridge. It is only when we cling to separation and duality that we encounter that cutting bridge. With that hair-thin bridge waiting, wasting focus on scorn is a dangerous thing, indeed.

To me, this is a powerful poem on the importance of compassion, humility, and proper spiritual focus. And it is a good reminder to us all that everything returns to the Golden Rule:

If there is any meaning in the holy books, it is this:
Whatever is good for you, grant it to others too —

Yunus Emre is considered by many to be one of the most important Turkish poets. Little can be said for certain of his life other than that he was a Sufi dervish of Anatolia. The love people have for his liberating poetry is reflected in the fact that many villages claim to be his birthplace, and many others claim to hold his tomb. He probably lived in the Karaman area.

His poetry expresses a deep personal mysticism and humanism and love for God.

He was a contemporary of Rumi, who settled in the same region after having moved from what is today Afghanistan. Rumi composed his collection of stories and songs for a well-educated urban circle of Sufis, writing primarily in the literary language of Persian. Yunus Emre, on the other hand, traveled and taught among the rural poor, singing his songs in the Turkish language of the common people.

A story is told of a meeting between the two great souls: Rumi asked Yunus Emre what he thought of his great work the Mathnawi. Yunus Emre said, “Excellent, excellent! But I would have done it differently.” Surprised, Rumi asked how. Yunus replied, “I would have written, ‘I came from the eternal, clothed myself in flesh, and took the name Yunus.'” That story perfectly illustrates Yunus Emre’s simple, direct approach that has made him so beloved.

2 Responses to “Yunus Emre – One Who Is Real Is Humble”