Thomas Merton – Song for Nobody

Published by Ivan M. Granger at 7:15 am under Poetry

Song for Nobody
by Thomas Merton

A yellow flower
(Light and spirit)
Sings by itself
For nobody.

A golden spirit
(Light and emptiness)
Sings without a word
By itself.

Let no one touch this gentle sun
In whose dark eye
Someone is awake.

A golden heaven
Sings by itself
A song to nobody. 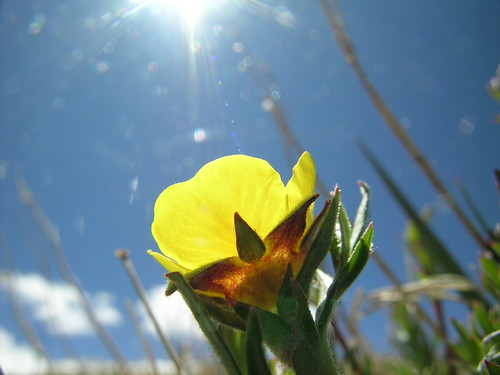 Let us sing a song… for nobody.

A yellow flower
(Light and spirit)
Sings by itself
For nobody.

I imagine Thomas Merton on a morning walk through a dawn-lit field where nothing much is happening. Just some damp grasses and a few bright flowers waking to the sun. Those flowers stand there unnoticed, unseen until now, yet they carry such bold life, bright yellow petals radiant in the morning sun. They are an embodiment of light and spirit.

All of life, all of existence sings — but for whom?

The world dances with a golden light. Who is the real audience for this performance?

Perhaps the intended audience is God. Perhaps the flowers array themselves for their own private delight. But Merton says this song of light and spirit is for nobody because it is clearly not for him. He is utterly inconsequential to the scene. The flowers don’t care about him. They don’t adjust themselves to his presence. In fact, he is the one who is unnoticed, not the flowers.

Enraptured by this moment of beauty, to which he is a non-entity, Merton disappears. Thought ceases, the mind quiets and brings to a halt its endless naming and categorizing. There is just stillness and the moment witnessed. That is when the ecstatic moment of awakening occurs — O, wide awake!

A golden heaven
Sings by itself
A song to nobody.

In this state of no-mind and no-self, we, along with Merton, are somehow profoundly alive! Awake, we see the world, perhaps for the first time, as it truly is — a golden heaven. And that heaven sings all around us, all the time! For whom? For no one in particular. Life sings to life. Spirit sings because it is spirit. The nature of being is song and light and life. When we quiet the busy mind and drop our own self-importance, we too join in that living symphony.

Thomas Merton was a hugely influential Catholic monk and mystic of the 20th century who wrote with great insight and inspiration on the spiritual journey and the quest for meaning and inner silence within the modern world. He was an important voice in opening up a dialog between the spiritual traditions of East and West. He himself studied many Eastern spiritual practices deeply, from Zen meditation to Hindu yogic philosophy.

He is best known today for his essays on the spiritual life, especially his first book, The Seven Storey Mountain.

4 Responses to “Thomas Merton – Song for Nobody”