Published by Ivan M. Granger at 8:58 am under Poetry

The
Great religions are the
Ships,

Every sane person I know has jumped
Overboard.

That is good for business
Isn’t it

— from The Gift: Poems by Hafiz the Great Sufi Master, by Daniel Ladinsky 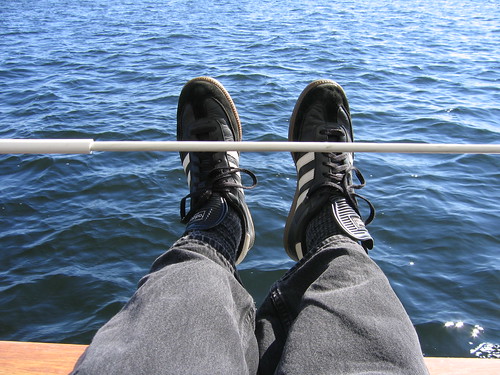 This is one of my favorite poems by Ladinsky. It winks knowingly at us, inviting us in on the joke. Without saying much, it suggests a lot about the relationship between formal ideas of religion, genuine insight, freedom, and the poetic impulse.

People sometimes wonder why I don’t feature more of Hafiz’s poetry from Daniel Ladinsky’s book, The Gift. They are such delightful, ecstatic, irreverent poems that have inspired so many people…

Ladinsky’s books put me in an awkward spot. I really like the poetry from Ladinsky’s books… but, well, they aren’t actually by Hafiz. His collection of poetry entitled The Gift: Poems by Hafiz the Great Sufi Master actually contains no lines of poetry written by the great Sufi poet Hafiz!

Daniel Ladinsky seems to acknowledge this in his introduction to the book, when he writes, “I feel my relationship to Hafiz defies all reason… I had an astounding dream in which I saw Hafiz as an Infinite Fountaining Sun (I saw him as God), who sang hundreds of lines of his poetry to me in English, asking me to give that message to ‘my artists and seekers.’”

You might say that Ladinsky’s poetry is “inspired by” Hafiz. Or, if you prefer a broader interpretation, you could say Ladinsky channels Hafiz. But his “translations” are not the historical writings of Hafiz. From the more limited scholar’s definition, these are poems by Daniel Ladinsky, not Hafiz.

So here’s what I do: I enjoy Ladinsky’s playful, profound poetry, but I look to other books to savor the historical poetry of Hafiz that Sufis and seekers have delighted in for centuries.

If you’d like to explore and compare them, here are some links to start with: