Mevlana Jelaluddin Rumi – There is some kiss we want

Published by Ivan M. Granger at 10:34 am under Poetry

There is some kiss we want
by Mevlana Jelaluddin Rumi

There is some kiss we want
with our whole lives,
the touch of Spirit on the body.

Seawater begs the pearl
to break its shell.

And the lily, how passionately
it needs some wild Darling!

At night, I open the window
and ask the moon to come
and press its face against mine.
Breathe into me.

The moon won’t use the door,
only the window. 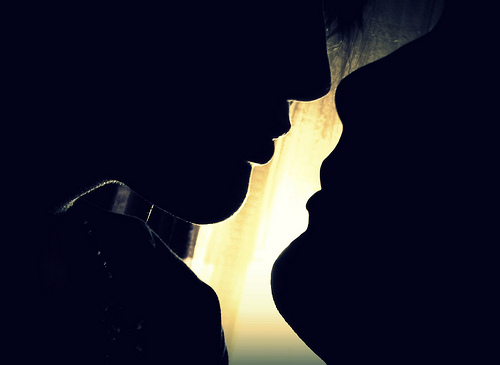 Isn’t this a wonderful selection?

I haven’t identified the original verses, so I don’t know how closely Barks’s version reflects the original lines. Barks tends to do rather loose renditions of Rumi, but with a sense of the poem’s heart and passionate abandon.

There is some kiss we want
with our whole lives…

Whatever we spend our lives doing, whatever we desperately seek or crave through the decades, underlying it all, that’s what we really want– that secret kiss, that feeling of being touched by Spirit. Not is some intellectual or philosophical sense, but in our embodied lives, not as a feeling or a thought or a belief, but as a sort of recognition. A self-recognition. We want to know in the deepest sense. Everything else we seek on a more surface level is either in pursuit of that, or sometimes in denial of that, but always an outgrowth of it, that kiss we want with our whole lives.

Try as we might, we can’t think our way into heaven. No matter how skillfully we conceptualize and elaborate even the most elevated ideas, that isn’t the way in.

The open heart is the way. It is the open window. Best for the verbalizing mind to fall silent or, when it is active, to work in service to the awakening heart.

The moon won’t use the door,
only the window.

I have been a bit distracted this week trying to sort out multiple technical problems with the Poetry Chaikhana’s website and Internet service provider. Hopefully, this is nothing you have bumped into trying to visit the site. We should have everything resolved soon. It’s all behind the scenes stuff that you don’t need to be especially concerned with, but since it has been a major focus for my week, I thought I would mention it.

At some point I should probably do a major redesign of the Poetry Chaikhana site. I have had the site up for 15 years now. Quite an accomplishment on the peripatetic web! While the content has expanded and changed, much of the basic design and structure is the same as when I started. Since I run the Poetry Chaikhana in my spare time, and balanced with chronic fatigue issues, I have only done basic maintenance since that initial creation. It might be getting time to bring the site into the modern era of web design before long. It’s a matter of being able to organize my schedule and finances to dedicate the time necessary.

Maybe I should ask you, the Poetry Chaikhana community: Would you appreciate an updated Poetry Chaikhana site? Not only the look and feel, which feels a bit static by modern sensibilities, but with a more dynamic and searchable structure. While I don’t know exactly when I will get to changes, I do welcome your feedback.

Rumi was born in Balkh, in what is today Afghanistan. While he was still a child his family moved all the way to Konya in Asia Minor (Turkey). They moved to flee from Mongol invaders who were beginning to sweep into Central Asia. Konya, far to the west of the invaded territories, became one of the major destinations for expatriates to settle, turning the city into a cosmopolitan center of culture, education, and spirituality. (These lands were part of the Persian Empire, so, while he lived most of his life in what is today called Turkey, culturally he was Persian.)